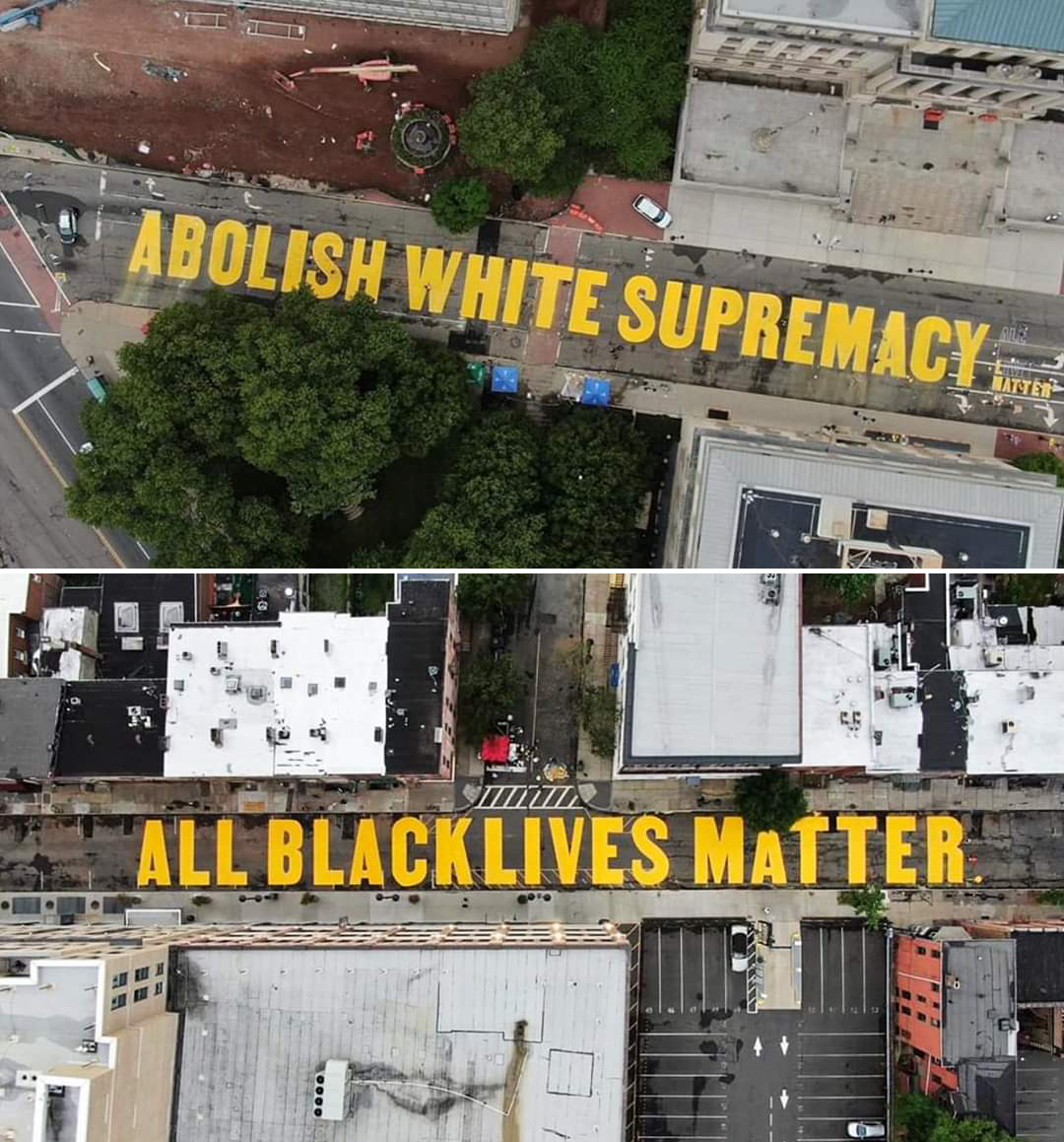 ‍NEWARK – (June 29) – In the past decade, public art in Newark has exploded on buildings, walls and rail corridors in vibrant colors and intricate design, delivering messages of hope, pride, and racial justice.

Internationally recognized artists Layqa Nuna Yawar, GERALUZ, and Gaia, and local artists including Manuel Acevedo, Steve Green, the late Jerry Gant and the late Gladys Barker Grauer, are among the dozens who have made impactful statements with powerful imagery.

Over the weekend, two of Newark’s busiest streets were painted with enormous messages promoting racial justice and equity. The murals were produced in collaborative partnership with the City’s Division of Arts and Cultural Affairs, Rutgers University-Newark Graphic Design Program, New Arts Justice at Express Newark, and local muralists Malcolm Rolling and Laqya Nuna Yawar. Nearly 300 students, artists, organizers and residents helped paint the messages throughout the day in 2-hour shifts as they practiced social distancing.

On Martin Luther King Boulevard between the Essex County Historic Courthouse and the Veterans’ Courthouse, the words “ABOLISH WHITE SUPREMACY” were installed and painted in bright yellow traffic paint from curb to curb. On Halsey Street, east of the Rutgers campus the words “ALL BLACK LIVES MATTER,” in the same font as the MLK street mural, taking up a City block.

At the MLK site on Saturday, Mayor Baraka took up a roller and put down a few coats of the yellow paint, which is resistant to traffic wear.

The project was executed in solidarity with global “Black Lives Matter” protests and inspired by recent policy changes. Mayor Ras J. Baraka drafted an ordinance approved by the City Council last week to create a permanent Office of Violence Prevention, and declares white supremacist groups as terrorists outlawing their activity in the City.

“The convergence of art and protest is an age-old practice, especially pronounced in African-American culture,” Mayor Baraka said. “Poetry, music, graphic arts and street murals are all public avenues to have our voices heard. “Newark is a movement City as well as a City of artists, and our community is one that advocates for equity and social change not just here but for the entire country.”

Chantal Fischzang, a professor from the Rutgers-Newark Graphic Design Program, said 40 students from the school were paired with 40 artists to draft and outline the mural’s 25 ft. high letterforms in preparation for the day of community painting. Rebecca Jampol, professor and co-director of Project for Empty Space, served as lead of the cohort and is also the champion and organizer of the Four Corners Public Art Project and “Gateways to Newark,” which is seen by thousands everyday along McCarter Highway.

The murals were designed using the MARTIN font by VocalType, named for Martin Luther King, Jr., and inspired by the signs “I AM A MAN” carried by Memphis sanitation workers during their strike for equal treatment in 1968. Dr. King addressed the strikers the night before his assassination.

The idea to develop the street murals in partnership with the City's social justice public art initiative was proposed by faculty from Rutgers-Newark's Graphic Design Program and the New Arts Justice Program.

“Our community street murals made a statement and model a solution,” said Professor Salamishah Tillet of Rutgers University-Newark and the director of New Arts Justice at Express Newark. “Through this unique collaboration between the city, community artists, and the university campus, we brought Newark, and our nation, one step closer to making the long-deferred dream of racial justice a reality.”

The working group arrived at “ABOLISH WHITE SUPREMACY” and "ALL BLACK LIVES MATTER" as the messaging selected for the project, taking cues from the recent ordinance.

“With these two statements, we are shifting the narrative to promote thoughtful reflection and continued dialogue. In order to say Black Lives Matter, we have to Abolish White Supremacy,” said City of Newark, Arts and Cultural Affairs Director fayemi shakur. “Through collective art-making, we were able to provide a space for safety, joy, and community engagement.”

Participants on Halsey Street waved the LGBTQ and Trans Pride flags proudly in celebration of Global Pride Day. All Black Lives Matter is a statement of inclusivity that brings more awareness about the Trans and Queer community, which has one of the highest murder rates in the nation.