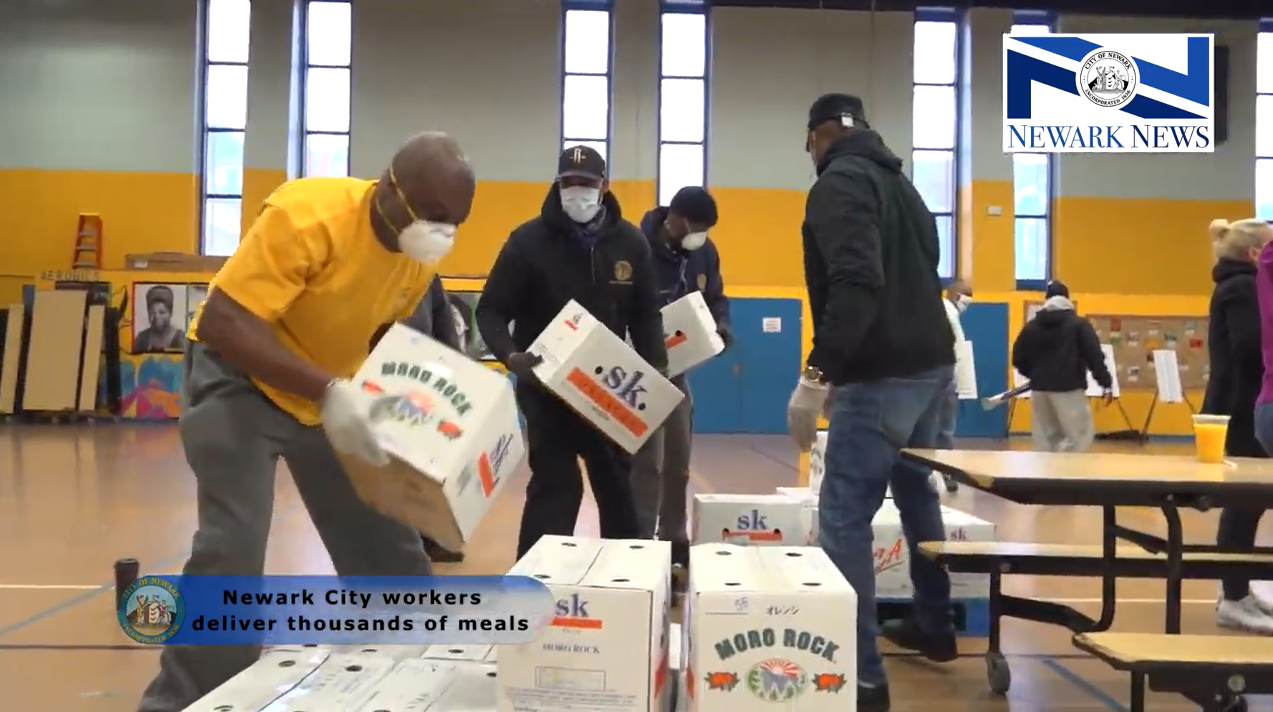 NEWARK -- With the organization and precision of an industrial assembly line, Newark City employees packaged 8,000 meals Wednesday to distribute to 2,000 residents in less than 90 minutes.

It was the second week of a City program to keep people fed – and safe -- during the COVID-19 lockdowns and, next week, the crew will do it again.

This show of workforce muscle happened at the JFK Recreation Center after 11 pallets of food donated by HelloFresh, the nation’s food kit leader, were dropped off by trucks from Table-to-Table, a company that distributes food to centers where there is need.

“We were expecting about 50 employees to show up, but we ended up with 100,” said Amiri “Middy” Baraka, Jr., the Chief of Staff for Mayor Ras J. Baraka, who organized the work detail. “This was great. We did it fast. We got the food and got it out to the people. I think it shows the spirit of our City workers.”

This new collaboration is one of several going on in the City and numbers of meals being delivered or handed out is staggering. Audible, the digital listening company headquartered in Newark, is supporting downtown restaurants and feeding residents each day through a $1 million initiative called Newark Working Kitchens. In a just a few weeks of operation, Audible and the downtown restaurants have delivered about 35,000 meals to elderly, disabled and low-income residents of Newark. City government, with help of the police and fire divisions, has supplied about 150,000 meals and the Board of Education has done an equal amount.

The assembly line method of the new initiative is taken directly from HelloFresh’s own production playbook. On the JFK basketball court, tables were set up as stations for various ingredients: protein, dairy, grocery and produce. Bags went down the line, with busy hands packing four meals per bag. Then the bag went to be labeled and sealed, then moved out for delivery.

One of the drivers was Hasani Council, an aide to Councilman John James and son of Pat Council, the City’s Director of Recreation, Cultural Affairs and Senior Services. Like all other City employees he was there to “help my community and make sure people get fed.”

All employees were offered surgical masks and gloves and had their temperatures taken before being allowed to work in the gym. When the food was dropped off, they went to work, breaking down pallets and loading tables with designated ingredients. When that prep work was done, the assembly line kicked into gear and full bags began to mount, getting ready for delivery.

The delivery drivers had addresses and phone numbers of people receiving food and would call them when it arrived so they could retrieve it quickly from their steps or doorways. Carts of meals went out the door to waiting cars with almost no confusion.

“We were organized,” Chief Baraka said. “It showed the way we got this done.”

Both HelloFresh and Table-to-Table have been longtime partners with the City. Table-to-Table director of operations Jennifer Nelson said her organization has delivered over 3 million meals to Newark over the years, while servicing food banks and soup kitchens.

The City workforce will again package about 8,000 meals for 2,000 residents next week and will keep up that pace until at least June. As the crisis continues, and the most vulnerable population remains wisely sheltered in place, the need for this volume of meals will continue.