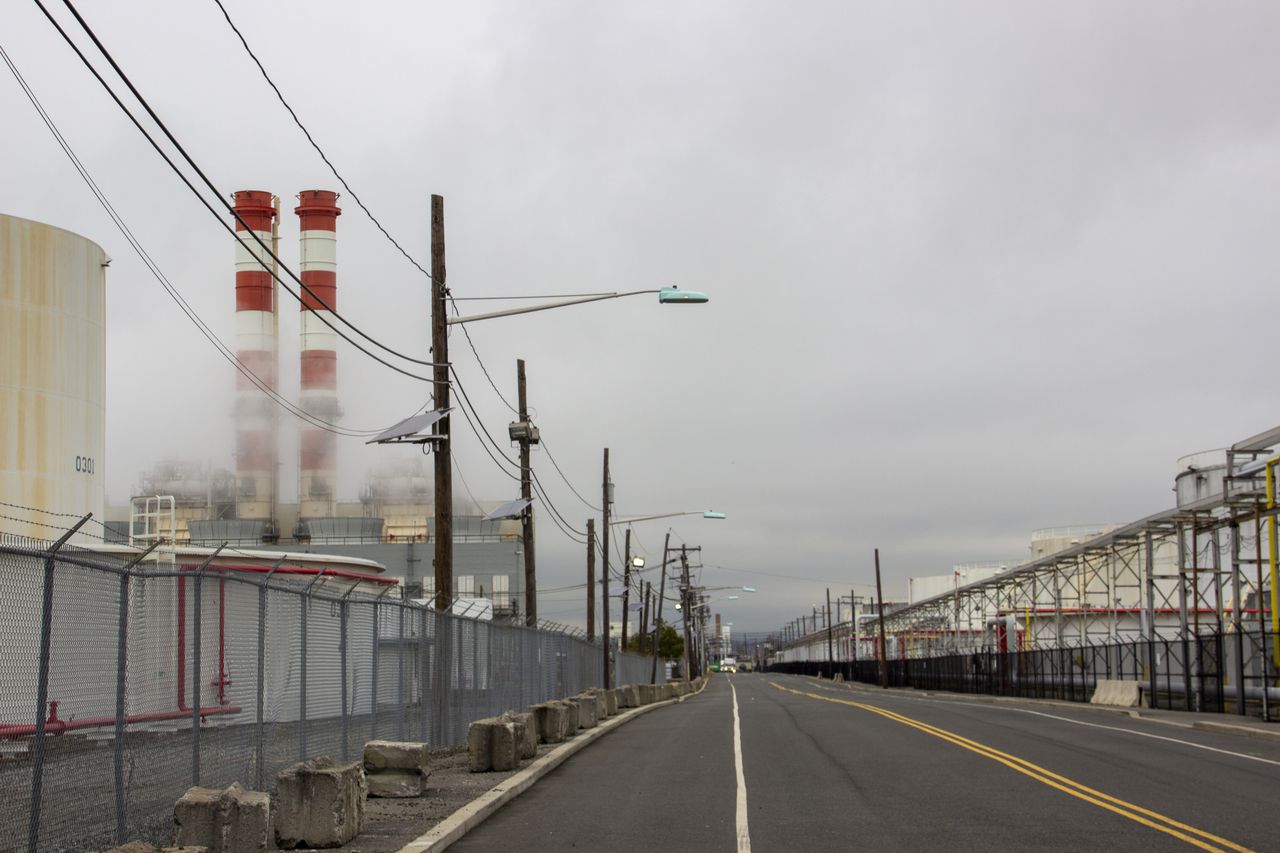 ‍
For the ﬁrst time in decades, local leaders are taking a close look at Newark’s industrial core — an area sometimes left out of the conversation as the city continues its revitalization.

Bound by the Passaic River to the east and north, I-78 and Port Newark to the south, and residential parts of the Ironbound to the west, the expanse is packed with tank farms, warehouses, junkyards, a power plant, an incinerator and a stench-producing fat rendering facility.

‍
The goal, Brick City oﬃcials say, is to shape a future for the area that balances the health of 50,000 residents in the nearby Ironbound neighborhood with the demands of industry. They’ll have to do that while dealing with an already strained and ﬂood-prone infrastructure as well as the worsening impacts of climate change.

‍
The ﬁnal product will be called Forward-Bound Doremus, a redevelopment plan Newark Mayor Ras Baraka’s administration has begun creating, in eﬀort to guide the next 10 years for the Doremus Avenue corridor. If they’re successful, the plan will cut down on pollution, manage chronic ﬂooding and support good-paying jobs.

‍
The area is adjacent to Port Newark which, like other ports in the New York City area, has seen steady growth in the volume of goods handled in recent years. That trend is expected to continue now that the area is accessible to the next generation of massive “ultra ships,” which can carry more cargo containers than ever before.

But environmental concerns are at the forefront of any plan for the Doremus Avenue area. Air pollution from trucks and industrial facilities has long threatened the public health of nearby residents. Future storms are expected to be made more intense by climate change, promising to bring more ﬂooding to an area that struggles with stormwater. Superfund sites and lots contaminated with chemicals from old industry dot the area.

‍
“Our port area is essential to Newark’s economy,” Baraka said in a press release this month. “It provides thousands of jobs for residents, but it is also a major source of pollution causing serious illness in the nearby community. We are creating a comprehensive planning process that brings together residents, businesses, environmental leaders, city oﬃcials and other stakeholders to chart the future of the Doremus area."

Down on Doremus Avenue

‍
A constant stream of tractor-trailers ﬂows along Doremus Avenue and onto nearby highways in and out of the area. Now that Port Newark is being called on by a new generation of massive ships, truck traﬃc could become even busier.

‍
All of that means jobs, and a lot of them. Businesses in the study area represent almost 10% of all jobs in Newark, according to Woo Kim, the principle-in-charge of the redevelopment plan for WRT, a Philadelphia-based ﬁrm that the city has contracted with.

‍
“I like to think of this area as sort of the Grand Central Station of freight in the Northeast,” Kim said during an online public meeting held earlier this month.
“The impact here is going to be enormous, and it’s going to have ripple eﬀects in the region.”

The Port Authority, which is part of the steering committee for the Doremus area’s new plan, said it is committed to making port operations more eﬃcient, with an emphasis on cutting air pollution.
‍

“As a major driver of economic activity in the region, the Port Authority is committed to working with the City of Newark and the State of New Jersey on redevelopment opportunities that both support local jobs and environmental best practices,” Abbie Goldring, a Port Authority spokeswoman, said in a statement.
‍

The industrial area is built on former marshland, a decision borne out of necessity to serve ships and barges. But that created a problem: Today, 70% of the study area is in a ﬂoodplain. Newark’s topography generally slopes downward from west to east. So when it rains in the city’s Vailsburg neighborhood, it ﬂoods into the Ironbound and through the industrial sites, Christopher Watson, Newark’s city planning oﬃcer, said.
‍

The ﬂood threat is compounded by the lack of pervious surfaces in the city to soak up stormwater. Instead, the landscape of unending concrete and pavement force the water to ﬂow downhill. Beyond that, Newark’s outdated combined sewer system, which collects stormwater and sewage in the same pipes, can be overwhelmed during heavy rains.

That ﬂood risk becomes greater every year as climate change brings increasingly intense storms to New Jersey. Now the ﬂood threat, and long-standing pollution from industry, is forcing the city to rethink how the area is used.
‍

“It is the city’s industrial neighborhood,” Watson said of the area, and the businesses that use it. “But a lot of uses there are decades old, and they don’t meet some of the modern resilience and sustainability benchmarks we would like for our city.”

‍
Almost all of the people living in the study area, Watson said, are the roughly 2,000 inmates at the Essex County Correctional Facility on Doremus Avenue.

‍
But some residential streets in the Ironbound are included in the area, and the city has made clear it is concerned about how the plan will aﬀect the future of the iconic neighborhood as a whole. More than 50,000 people live in the Ironbound, 65% being people of color.

“What happens in Doremus directly aﬀects the people that live in the Ironbound,” Watson said. “So it’s looking at the residents of the Ironbound in tandem with Doremus.”
The stream of trucks going to and from Port Newark passes by and through the neighborhood. Those diesel emissions mingle in the Ironbound’s air with pollution from the nearby incinerator and other industrial facilities. Neighborhood houses and schools lie under ﬂightpaths for Newark Liberty International Airport.
‍

Maria Lopez-Nuñez, the deputy director of organizing and advocacy for the Ironbound Community Corporation and a member of the steering committee for the new redevelopment plan, stressed that the plan must ﬁnd a way to deal with the area’s air pollution while keeping jobs in the area. She said striking that balance will likely mean bringing new kinds of industry to Doremus Avenue.
‍

“We want to make sure it’s good jobs,” Lopez-Nuñez said. “Good jobs and good industry that’s good for the environment. And that give us a cleaner New Jersey, not continuing a legacy of pollution.”
‍

The city wants to see the same thing, according to Allison Ladd, Newark’s director of economic and housing development.
‍

“It’s critically important to us to have a connectivity between this industrial space, the port, but also our East Ward and Ironbound community,” Ladd said.

Planting “buﬀer zones” of trees, which would serve as sort of air ﬁlters to help cut down on pollution and odors, is one option the city is considering to alleviate the problems, Watson said. He added that the city is exploring ways to expand green spaces and river access in the area.

‍
Access to the Passaic River is a priority for Lopez-Nuñez. Getting to the riverfront is almost impossible today, as the banks are largely privately owned and dominated by industrial lots. The major exception is the county’s Riverfront Park, a 12-acre parcel of green space in the Ironbound that opened in 2012 and is now the only place in the city with public access to the river.

“Instead of it being littered with a toxic industry that dumps into the river, I think it would be amazing if we can, you know, ﬁgure out what public access might mean,” Lopez-Nuñez said.
‍

What comes next
‍

The redevelopment plan will be created by a steering committee consisting of industry stakeholders, community organizations, lawmakers and residents. A team of 13 “ambassadors” led by City Hall will work to keep the community engaged throughout the process.
‍

Work on the plan technically began in February, and has been focused on analyzing current conditions in the area. The rest of this year and the ﬁrst quarter of next year are expected to be used for collecting stakeholder input and creating the redevelopment plan. The ﬁnal version of the plan is slated to be released in April or May, according to the city.
‍

Beyond the focus on Doremus Avenue, Newark is developing a new citywide master plan. The public portion of that process will begin in early 2021, Ladd said.
‍

For now, Watson said it’s too early to speculate on speciﬁcs of what the Doremus Avenue corridor will look like in coming decades. But he and Ladd encouraged residents to get involved with the process, and the let city know what they’d like to see.
‍

Michael Sol Warren may be reached at mwarren@njadvancemedia.com.
Note to readers: if you purchase something through one of our aﬃliate links we may earn a commission.