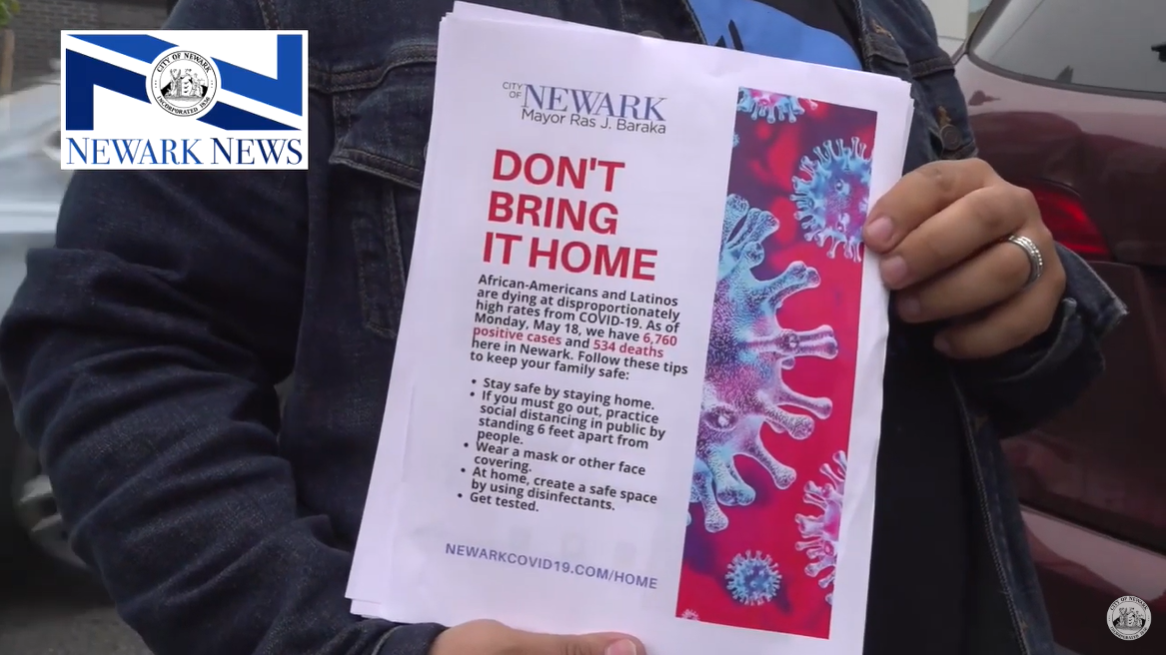 NEWARK – May 27, 2020 – Shane Love, all 6-foot-4 of him, walked up on a group of teenagers sitting packed together on the brick walls outside an apartment building called the Willows at Symphony Hall on the extension of Halsey Street, south of West Kinney. A few minutes earlier, they crowded the front of a bodega at the corner.

Wearing a black vest with the letters NCST stenciled on the back, Love approached the group with a bag of protective masks and informational flyers explaining the rules of social distancing and other protective measures to stop the lethal spread of COVID-19.

“They were receptive,” said Love, a member of the Newark Community Street Team, after the dozen or so previously unmasked teens masked-up in his presence. “We relate to them because they know at some point in time, we were just like them.”

"We're here because you are our future," Rev. Rountree told the kids. "We're here to tell you Newark isn't like the rest of the country. We still have to stay inside and stay alive."

Mayor Ras J. Baraka asked Rev. Rountree to meld the NCST and clergy to form the "Information and Education" street team, and fan out across the City to dispel the notion that COVID-19 was no longer a grave threat in Newark, as opposed to some parts of the state and nation taking the risk of re-opening.

Founded by Mayor Baraka, the NCST is a violence prevention group, offering safe passage to schools and mentoring young people from 14- to 30-years-old, to steer them away from violence and succeed through achievable, short-term goals. The NCST also has a “high risk intervention” team which targets certain areas where violence has flared up to counsel and mediate, and restore peace to the neighborhood.

With the state relaxing some of the shelter-in-place rules going into Memorial Day weekend, Mayor Baraka knew the NCST could take on a different kind of high-risk intervention. Partnered with the clergy, the NCST took the COVID-19 battle to the streets and went out to reach and teach mostly young people about the continued grave dangers of the deadly virus. The "Information and Education" street teams will be out again this week on Thursday, Friday, Saturday and Sunday.

“It’s the people in the 16- to 30-year-old age group that are the biggest challenge,” said Keesha Eure, the director of the Shani Baraka Women’s Resource Center who was out as part of the "Information and Education Team."

“They like to be outside, hanging out at parks or in front of stores," she said. "Now that the weather is getting warmer, we have to remind them how dangerous this disease still is. For us the message is still the same. 'Stay inside, stay alive.'"

Daamin Durden, the chief operating officer of the NCST said educating young people about how lethal the disease has been to the African-American community is keeping with the team’s philosophy.

“Public safety is not just the absence of crime, it is the presence of well-being,” Durden said.

Looking at the corner of Halsey and West Kinney Street, where some unmasked people mingled with others ignoring social distance, Durden said it was part defiance and part “defiance through ignorance.”

“We’re here to give them information and the statistics,” Durden said. “For some we have to calm their fear and give them hope. Either way, we are here to ‘educate and uplift.’ That’s Mayor Baraka’s whole thing."