Mayor touches all bases in COVID-19 discussion with reporters 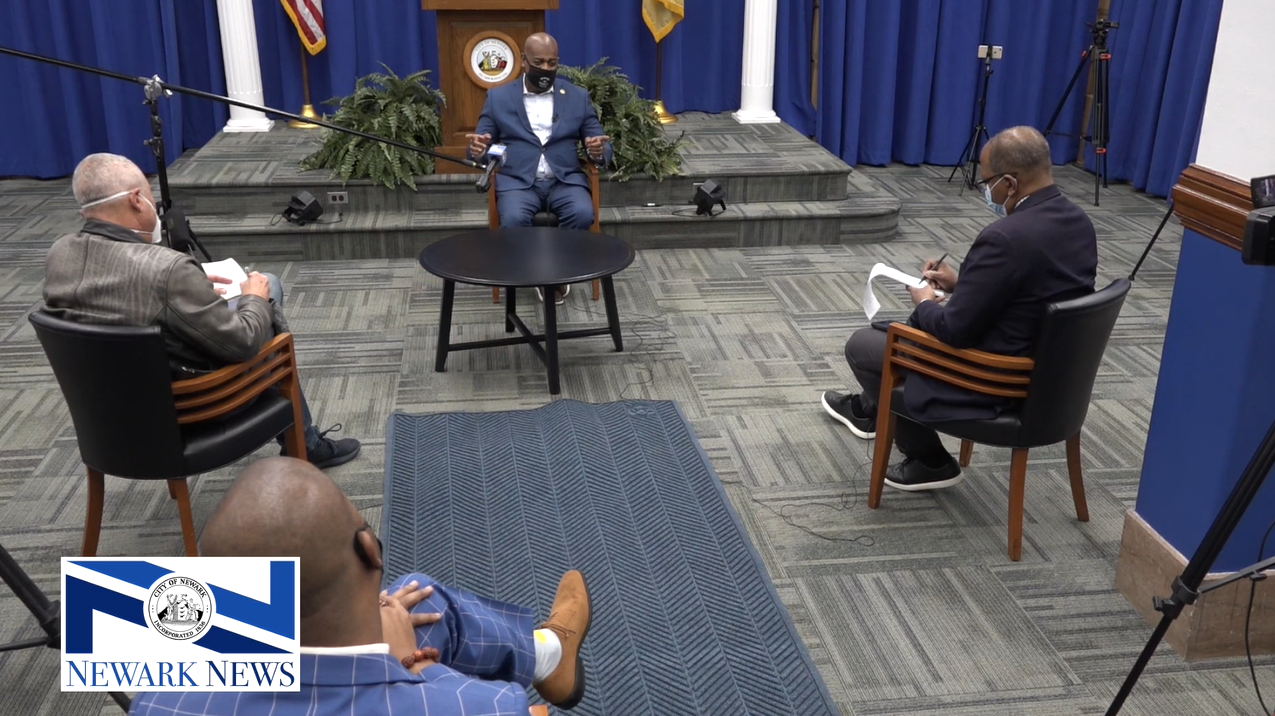 In a wide-ranging roundtable conversation with three local reporters, Mayor Ras J. Baraka spoke about several aspects of the COVID-19 crisis, including recent lockdown, transmission dangers of the upcoming holidays, his hopes for community acceptance of the vaccine and how leading the city through the 10-month COVID siege has affected him personally.

Mayor Baraka called COVID-19 “the greatest tragedy in the history of the country,” during the hour-long conversation with reporters Tehsuan Glover of the Newark Times, Michael Hill of NJTV and Brian Thompson of WNBC-TV today in the City Hall press room. “But people don’t see it yet, because we’re still in the middle of it.”

For context, the number of American COVID-19 deaths now rivals the number of people killed in battles during World War II, though the overall war deaths are higher, and Mayor Baraka expressed deep concern that the latest surge is only due to “COVID fatigue.” The Mayor said the cases could skyrocket beyond spring infection rates without serious intervention if the virus mutates and creates a more deadly second wave.

“It scares the heck out of me,” he said. “If things are worse than April, we will be in seriously bad shape. That would be the darkest winter.”

During the interview, the Mayor revealed he would take the COVID-19 vaccine when it became available and keep a journal of how it was affecting him to share on his Facebook live briefings.

“There is skepticism in the African-American community and with good reason,” the Mayor said, citing past abuses of Black people by the medical industry. “Our fears are warranted, real and validated.”

Citing recent statistics that only 40 percent of African-Americans say they would take the vaccine, the lowest of all ethnic or racial groups, the Mayor stressed it was incumbent on him to lead by example, and encouraged state and national leaders to come up with a “full-fledged vaccine campaign” to give people information and alleviate fears.

Credited by one reporter for his aggressive, proactive approach to the disease from the very beginning, Mayor Baraka was asked to speculate what would have happened had he not taken what he has described as “Draconian measures.” The Mayor said that infection rate models and predictors from Rutgers and the New Jersey Institute of Technology said transmission rates and, presumably deaths, could have been two or three times higher.

“That’s why we put the measure in place to reduce the rates,” the Mayor said. “At one point (in the spring) we had an positivity rate of 68 percent, which was bizarre.”

With the aggressive approach, however, positivity rates plummeted to as low as 0.5 percent and there were weeks through July and August with no or very few new cases or deaths.

The Mayor said he would like to see a return to full shutdown, but realizes he can’t stop people from gathering for the holidays.

“People need to see each other, to be around people they love,” the Mayor said. “But it’s what they do the next day, if they go out to a restaurant or the bars. Then the chances of infection grow exponentially.  We had Thanksgiving, but now we have Christmas and Three Kings in the Spanish community and New Year Eve parties. I would like us to shut down and not have people gather in public places.”

The Mayor said his Education and Information teams will be out in full force during the holidays to remind people to wear masks, keep social distance and not congregate in public.

The Mayor said he was at times “exhausted and worn down” and frustrated that the disease has prevented him from communicating with people in person. Also, the rigors of running the City have not changed. The garbage has been picked up, people still have to pay their taxes, and more than 16,000 of the lead lines have been replaced.

“But I take my vitamins, exercise and pray,” he said to maintain his spiritual and emotional health.

He concluded the one-hour interview with a story about a woman who contacted the administration saying she was thankful for the food she was being provided, but feared being alone for the holidays.

“It impacted me because I thought of all the people who died alone (during COVID-19),” he said. “For so many people, human contact is gone. This is a rough time of year anyway for depression and suicide. But this year we are in unchartered waters, these are dangerous times.”

The Mayor said he wants to offer hope to people and “keep things a little light” during his Facebook live briefings and assure people “that we will get past this.”

“The vaccine is coming,” he said. “But we can’t get lazy. We can’t let our guard down.”