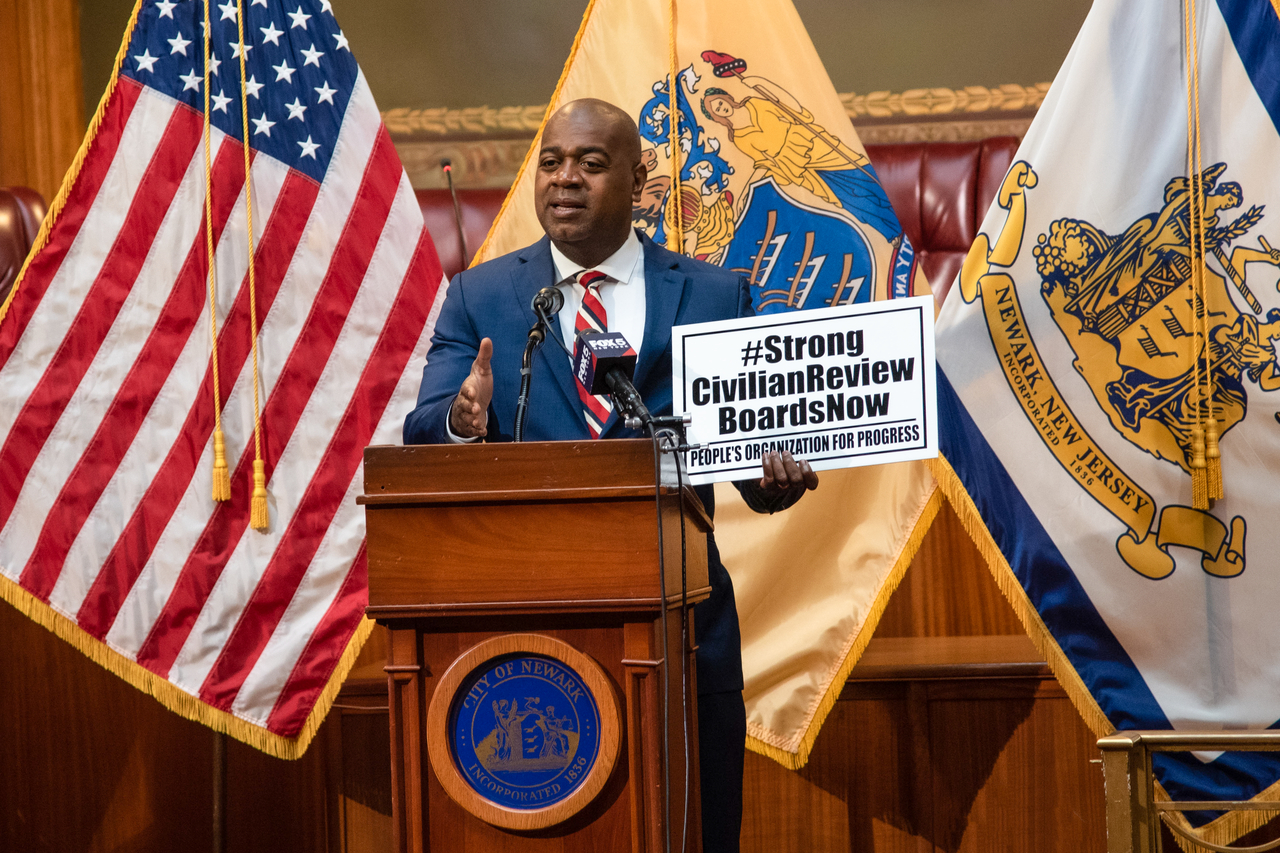 Newark, NJ — June 3, 2021 — Mayor Ras J. Baraka held a press conference today in City Hall to urge the State Legislature to pass the A4656/S2963 ‘Civilian Complaint Review Board’ bill. This landmark legislation, sponsored by Assemblywoman Angela V. McKnight, Assemblyman Benjie E. Wimberly, and Assemblywoman Shavonda E. Sumter in the Assembly, and Senator Ron Rice in the Senate, if enacted, would authorize the creation of Civilian Complaint Review Boards (CCRBs) to review police operations and conduct, as well as appropriate $800,000 to this purpose.

The legislation needs 41 votes in the State Assembly and 21 in the State Senate for passage and is the strongest action the Legislature and Governor can do right now to protect essential powers that will authorize strong civilian review boards in New Jersey. Mayors, cities, organizations, advocates and residents across the Garden State are calling for the bill to be passed by the Legislature before the end of June.

At a time when police behavior, transparency, and reform have taken center stage in the nation’s political discussion, Newark has been recognized as a national leader in addressing police reform and a CCRB with full subpoena power is an important tool in creating true transformational change.

“As the injustice, inequality and oppression of the killing and brutality of men and women of darker hue by those who were sworn to uphold and protect is visible and evident on social media and our news stations, the call for justice and accountability has never been louder,” Mayor Baraka said. “The paradox that these efforts to hold officers who break their oaths to protect and serve our residents accountable remains stalled in Congress, courtrooms, and our legislature is unfathomable. We must turn this proposed legislation into law immediately, to make our communities whole otherwise these abuses will continue, and so will needless tragedies and chronic community trauma.”

“This is togetherness. What’s happening now is us working together for the betterment of New Jersey. I commend Mayor Ras Baraka for continuing to carry the torch of a Civilian Review Board in municipalities by galvanizing the community to stand up for what is needed in this bill. It is truly humbling to see so much support for this bill from all across the state. I will continue to make the voices of these mayors and residents heard in the statehouse,” said Assemblywoman McKnight (D-31).

“A civilian review board is essential and provides an avenue for residents to have insight and input on incidents of misconduct that have historically gone unaddressed,” said Assemblywoman Sumter (D-35). “It also seeks to foster productive and positive relations between police and communities, wherever they serve. Giving the community a seat at the table is necessary to our healing as a collective people and a nation. We must no longer accept the status quo and we must actively work together on accountability practices and rebuilding trust in law enforcement within our communities. Implementing a civilian review board is critical to all levels of government. We must acknowledge that this is part of a larger effort to enact impactful social justice reforms that are long overdue throughout the state.”

“Our police officers play a vital role in keeping our communities safe, selflessly serving and sacrificing for our protection, and for this we applaud them,” said Assemblywoman Britnee N. Timberlake (D-34), who is a supporter of the bill. “However, as this legislation indicates, community members should have the ability to be a part of this crucial process to make our communities safer. During a time when so much is happening nationwide with policing, it is important now more than ever that our state take proactive steps forward to progress efforts to enhance community policing and community involvement in regulation and oversight with the establishment of civilian review boards. When we work together, law enforcement and citizens alike, positive changes can come about to make our neighborhoods better for all.”

“The passing of this legislation would directly impact community-police relations by increasing transparency, accountability, and ultimately, public trust in law enforcement,” said East Orange Mayor Ted R. Green. “It is critical that we support policies and programs that reinforce successful policing at all times, but especially in communities where we know people of color are the majority and whose rights have been violated for far too long. Given the heinous acts of police brutality exposed throughout the country, we must take proper action to ensure that all New Jerseyans are protected regardless of race, creed or color.”

“New Jersey is blessed with so many good, community-oriented police officers. We cannot allow the few bad officers to hide behind a wall of secrecy that destroys trust and tarnishes the relationships between our residents and police departments any longer. The time has come for greater transparency and community input. That is why I support Assemblywoman McKnight's legislation A4656/S2963 for the creation of localized Civilian Review Boards with subpoena powers in New Jersey,” said Mayor Gayle Brill Mittler of Highland Park.

“This is common-sense legislation, but is truly paramount to Newark’s future as well as the future of the entire State. Every municipality in New Jersey should have an opportunity to have a CCRB that will safeguard equal rights and equal protection to its citizens,” said City of Newark Corporation Counsel Kenyatta Stewart. “The sponsors of the legislation have been incredible. They truly listened to the people and drafted legislation that creates a solution that we can all be proud of. New Jersey must now act on its promises of being a progressive State and allow for strong civilian review boards for its residents.”

“NAACP Newark NJ urges passage of the bills that will support Civilian Complaint Review Boards becoming a reality. Having subpoena and investigative power will be a transformative step toward true police reform in our city and state,” noted Deborah Smith Gregory, NAACP Newark President.

“The people of Newark have demanded real, meaningful, oversight of police for over 60 years. Thanks to Newark’s leadership, communities all across New Jersey want the same thing: accountability and reform. This starts with community oversight. The ACLU of New Jersey has worked alongside Newark and our partners across the state for decades demanding reform, and we are not letting up. We are proud and grateful to stand with Mayor Baraka, Assemblywoman McKnight, Assemblywoman Sumter, Senator Rice, and other legislative leaders to pass A4656/S2963 to allow for strong civilian review boards in communities across the state,” said Amol Sinha, the Executive Director of the ACLU-NJ.

New Jersey needs legislation that allows the creation of civilian review boards at the city, county and state level as well as the following:

Click here for the Social Media Toolkit. It can be used to make social media posts in support of the Civilian Complaint Review Board legislation A4656/S2963.