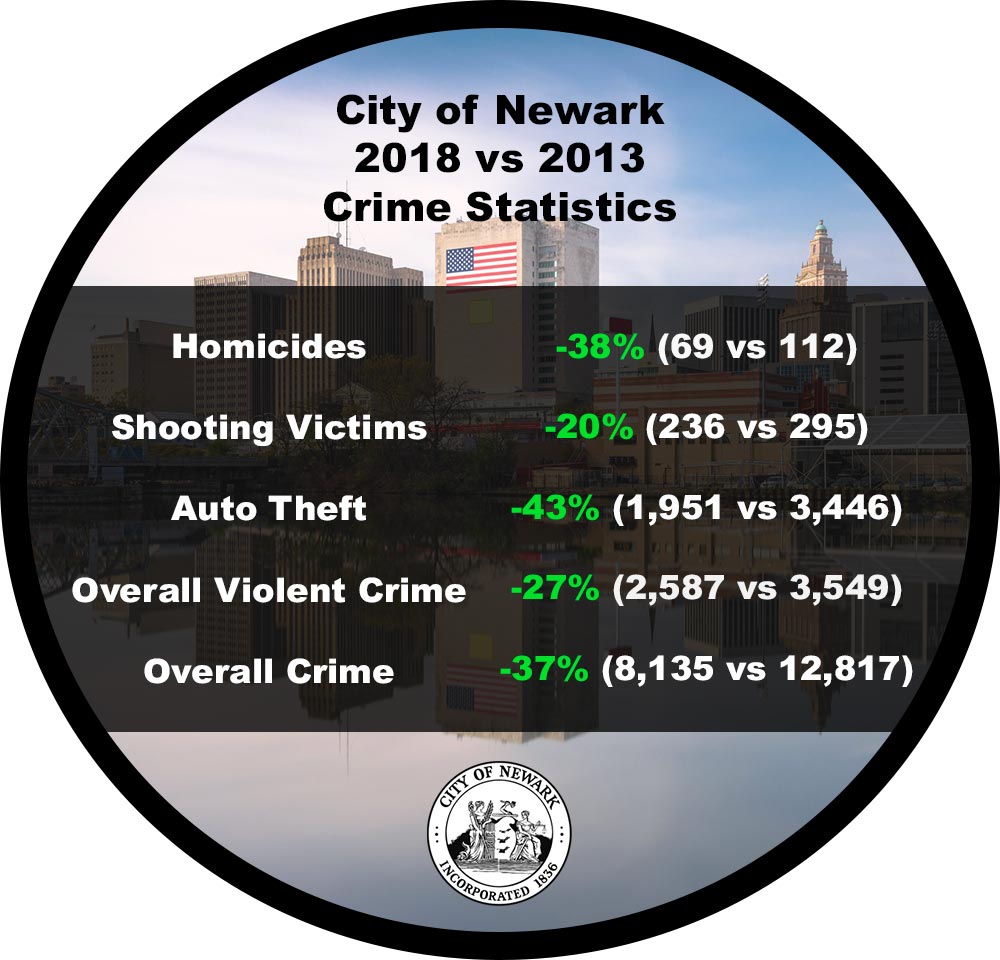 Police also reported a 35 percent drop in robberies, resulting in 384 fewer victims, and a 6 percent decrease in violent crimes last year when compared to 2017. Homicides fell 4 percent in 2018 over 2017 figures. Property crimes also decreased by 18 percent during 2018 versus 2017, with the biggest decline in carjackings, which fell by 56 percent last year over 2017. Burglaries decreased 30 percent over the previous year, and thefts from vehicles fell 16 percent during the same period. Car thefts also fell by 16 percent last year versus 2017.

A major accomplishment during 2018 was the opening of two new precincts. The 6th Precinct was opened in April in the Vailsburg section, and the 7thPrecinct was opened in November in the Roseville section. The strategy of opening these two precincts was developed to provide greater police presence within smaller geographical areas within these two neighborhoods.

Further, body-worn cameras were deployed to all seven precincts last year and the Citizen Virtual Patrol, which gives the public access to the city’s surveillance cameras, grew from 62 cameras when launched last April, to 126 with nearly 8,000 registered subscribers by year’s end. We showed a reduction in crime of 4 percent in areas where the cameras are deployed.

“I commend the men and women of the Newark Police Division for these positive 2018 crime stats,” Mayor Baraka said. “Collaboration with our law enforcement partners at the federal, state, county and local levels has contributed to these results.” he added. "Collaboration with the people of Newark themselves has also made an enormous difference.  Working with Director Ambrose and his public safety team who are committed to fully involving the community, we have the Newark Community Street Team, community engagement programs, and increased assistance from concerned citizens who report crimes using our Newark Police Division Smartphone app and by participating in our Citizen Virtual Patrol. We are seeing many fewer crime victims due to these collaborative efforts. A significant reduction of unemployment in Newark also contributed to reducing crime here” Mayor Baraka added.

“Seeing a decrease in the number of shooting victims along with fewer robberies and carjackings are positive results that I’m grateful for,” Director Ambrose said. “While Chief of Police Henry and I recognize that there’s still work to do, these accomplishments show that our police officers are putting forth a tremendous effort to reduce crime in our neighborhoods. Other important achievements made last year are the use of body-worn cameras in each of our seven precincts,” he added. “This step ensures that interactions between the police and members of the community are documented as positive and progressive. In fact, our results indicate that citizen contacts rose in 2018 with fewer complaints.”