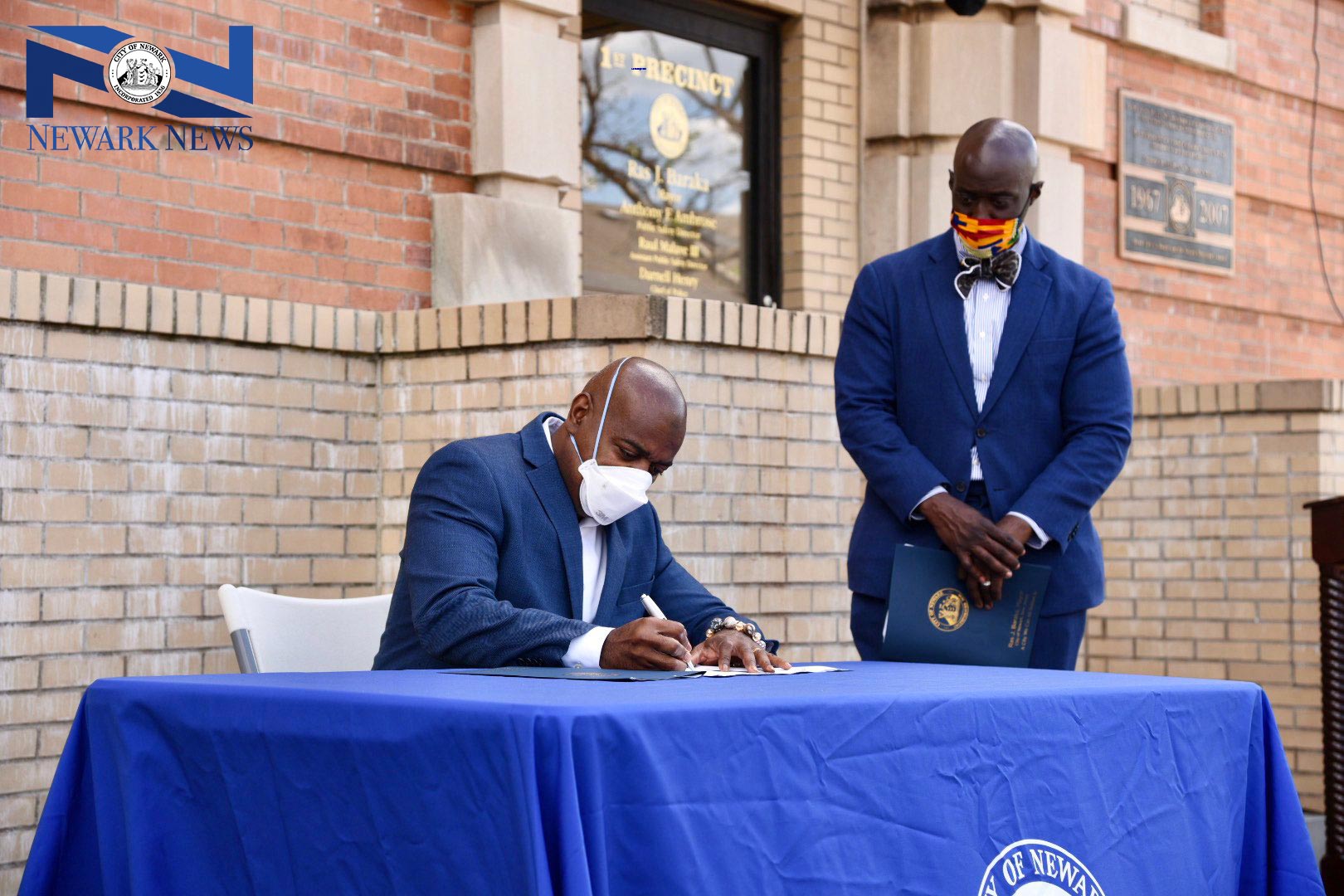 NEWARK – (June 25, 2020) – The bricked-in windows of the City’s 1st Police Precinct are a symbol of the community’s past alienation with law enforcement, as is the bronze plaque commemorating the 1967 rebellion.

Mayor Ras J. Baraka stood in front of that building to proudly announce the new City ordinance that will transform the building into a symbol of Newark’s progress in community-police relationships and the Mayor’s dedication and continuing fight to suppress violence and bring comfort to its victims.

“This is a historic moment in the City of Newark,” Mayor Baraka said at the foot of the precinct steps yesterday as he announced the passage of an ordinance creating a permanent ‘Office of Violence Prevention’ by the City Council yesterday. “I’d like to thank the City Council for their support of this historic ordinance.

“Other cities have created these types of offices as ‘policy,’ but we have made it a law,” the Mayor said. “I’m not going to be Mayor forever, people change and policies change, but it’s much harder to change a law.

The office will initially be funded by 5 percent of the Public Safety budget, or about $12 million, and calls for the precinct to be closed by Dec. 31, 2021. It will be transitioned into a museum chronicling local activism in Newark and positive police changes, a trauma center for victim recovery and healing, workforce development, as well as the Office of Violence Prevention and the headquarters for the Anti-Violence Initiative. The ordinance also defines white supremacist groups as terrorists and outlaws their activity of any kind in the City.

“This is not about what they say,” the Mayor said, alluding to potential free speech challenges. “This is about what they’ve done. They have terrorized and murdered Black people for more than a century, so we will define them as terrorists and keep them out of our City.”

History – and the will to change it – was the backdrop to the creation of the ordinance, as the Mayor reflected on his personal mission to combat police violence long before the most recent round of protests inspired by the death of George Floyd.

“This is nothing new for us,” said Mayor Baraka, a founding member of the Newark Anti-Violence Coalition more than a decade ago. “When I was a South Ward Councilman, we demanded violence be looked at as a public health crisis.”

As Mayor, he organized “street team” activists to flood the small sectors of the City where most of the violence occurs to intervene in growing  neighborhood tensions.

The Mayor said the George Floyd death at the hands of Minneapolis police “expedited what we were trying to do in a slow, methodical way.”

During yesterday’s press conference, Public Safety Director Anthony F. Ambrose, who joined the Newark Police nearly 40 years and rose to Chief, said the new police initiatives of constant non-crisis community engagement, new policies in use of force, bias perception, and searches and seizures, and the use of body-worn cameras, have created a transparent department no longer bricked-in from the City.

“I think we are becoming a model police department,” Ambrose said. “The City is becoming a model for the rest of the nation, and if they pay attention to what we’re doing here, they can solve a lot of their problems.”

The changes have attracted national and international media attention from the New York Times, The Guardian, PBS NewsHour and CBS News.

To add to the historic weight of the moment Mayor Baraka invited Newark Historian Junius Williams, and activist and U.S. Senate candidate Larry Hamm, to the signing of the ordinance. Both spoke eloquently of how the Baraka administration had worked hard to ease tensions between the Black community and police and reduce the violence in the City.

“If my father were alive, he would surely be here today, too,” the Mayor said in introducing the both men, who were contemporaries of poet/activist Amiri Baraka.

“We will never again see a war on the people by police,” Junius Williams said. “We now have a combined operation between police and community to prevent crime.”

Larry Hamm, who was mentored by the Mayor’s father and has protested police brutality for four decades, also applauded the ordinance as a model for “diverting” police militarization funds to community solutions.”