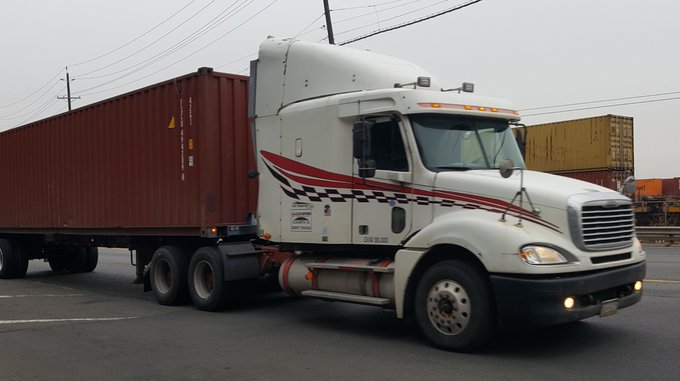 By any measure, Newark is one of the trucking capitals of the world.

Thousands of big diesels come through on the Turnpike, on Routes 1 & 9, Interstates 78 and 280, every day, to sometimes idle on Corbin St. and Port St. waiting to either pick up or unload from the many freight warehouses at Port Newark.

Trucking out of the Ports Newark and Elizabeth and the airport brings most of the refrigerated and frozen food, new cars and other imported consumer goods to the 100 million people in the Northeast metro regions. Last year, the ports handled 4.1 million shipping containers with about 3.8 million hauled out by trucks.

“We welcome EPA’s efforts to ensure cleaner, greener operations at the port,” Newark Mayor Ras Baraka said. “On any given day as many as 300 trucks drive through Newark’s Ironbound neighborhood alone. Far too many of the vehicles are older, dirty trucks driving through fence-line communities.

“By replacing them with clean-burning, newer models, the Port and its tenants will decrease particular matter in the air while increasing worker health and modernizing their fleets,” the Mayor said.

“This is why the Cleaner Trucks Initiative and the proposed rule making are vital to the health and well-being of Newarkers.”

Beginning two years ago, the ports banned trucks built before 1996, which, because of old diesel engine technology, released greater amounts of nitrogen oxides (NOx) into the air.

The new standards, when put in place, will be even more aggressive.

“I encourage regional input from industry, community groups, government agencies and other stakeholders on this new initiative,” said Lopez. “This rule will have a major impact on improving air quality in the future and the reduction on pollutants from heavy duty trucks will help our states meet their air quality goals.”

Mayor Baraka said the “City was doing its part” and spoke of the “multiple initiatives to address the air quality we face locally,” including stronger enforcement, redevelopment planning for port area, and looking at pollution through an environmental justice lens.

“Our city council adopted the Environmental Justice & Cumulative Impacts Ordinance in 2016,” the Mayor said. This nationally-recognized legislation seeks to limit pollution in our neighborhoods by considering how new developments might interact with existing industry.  This legislative effort exemplifies the core values of my administration.

* A Safe City that recognizes multiple sources of trauma, including environmental injustice

* An Equitable City guided by principles of justice to eliminate the disparities we face.