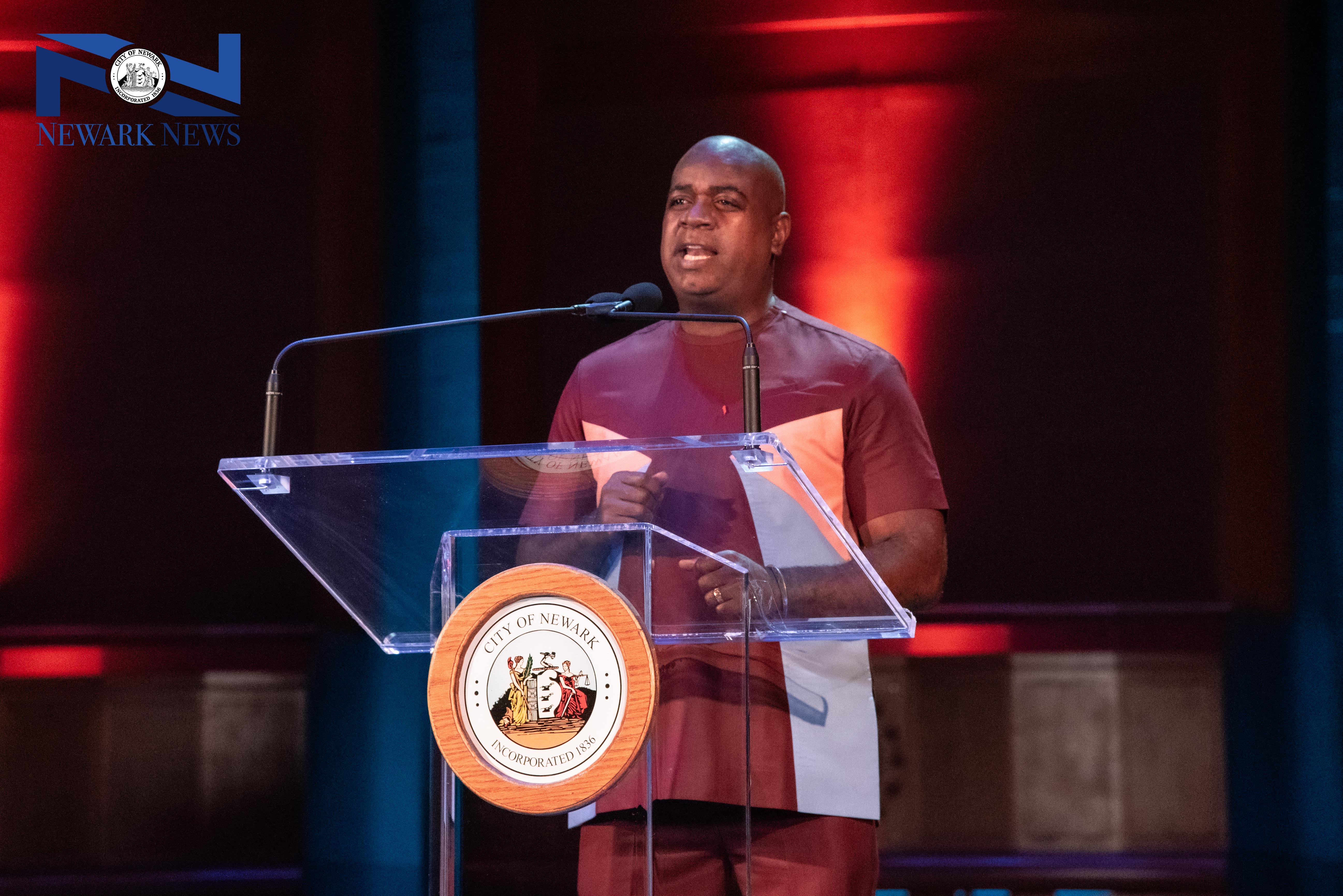 In front of a mostly empty New Jersey Performing Arts Center due to COVID-19 restrictions, Mayor Ras J. Baraka gave an impassioned and stirring State of the City 2020 speech as if delivered to a full house.

With the orchestra seats covered in blue and white sashes that spelled out a giant N and stood as a memorial for those Newarkers who had lost their lives during the pandemic,  the Mayor opened the night with a moment of silence for those victims, saying, “tonight, the theatre is decorated in the City’s colors to pay homage to their memory.”

After thanking the City council for their support and the directors and employees “who work to execute all that we imagine and envision” the Mayor began to memorialize major accomplishments and growth of the City during a year that brought unprecedented challenges.

“And we thank more than all, the incredible and resilient residents of this great city,” Mayor Baraka said. “We are Newark. Newark stronger. Newark leading. And as Ken Gibson would say, Newark getting there first. It took this country to get to its darkest moment for the stars to shine the brightest. We, Newark, are one of those stars.”

The Mayor spoke of the City’s emphatic response to COVID-19 to lessen the impact of the deadly virus on residents “that suffer disproportionately from the pre-existing illnesses that exacerbated the outcome of COVID-19.”

As the disease spread, April saw about 200 to 300 new cases a day. But with simultaneous force, the City sheltered and sequestered close to 80 percent of the vulnerable homeless population, began the distribution of more than 2 million meals (including those handed out by the Board of Education) and began a robust and constant sanitization of the City’s senior housing complexes. These actions alone saved untold lives and, coupled with the Mayor’s self-described “Draconian” shelter-in-place orders and enforcement, slowed the COVID-19 march to a manageable crawl.

“We had to act and act swiftly consistently without trepidation and with clear data,” the Mayor said, as Newark became one of the first cities in the country to set up effective contract tracing and walk-up testing.

“But I want us to be clear this virus is pernicious and stubborn,” he added. “We are not in the clear yet. We have to maintain our fight, be vigilant and consistent, look out for our neighbors, and our children. Wear your mask. Wash your hands continuously. Practice social distancing, get tested, and work to preserve our City and not put it in harm’s way.”

Moving on from the COVID-19 topic, which dominated the top of the Mayor’s speech, talked about social justice and economic equality, and his fight to get a Civilian Complaint Review Board with subpoena power through the courts and the New Jersey Legislature.

“With the help of Assemblywoman Angela McKnight and every legislator that believes in freedom we will have what we fought for,” he said.

He spoke of the City’s first paper cooperative managed and owned by Newark residents, a new office to give people free legal services, new laws around affordable housing, and heightening minimum wage to $15 an hour for City workers.

“We developed stronger relationships between community and police. We figured out how to arrest less people and still watch crime drop, we declared Newark a safe and welcoming city to immigrants no matter their nationality or language. We passed local laws against criminalizing them,” he said.

“We helped to create and advance small Black and Brown businesses to get them bonding capacity, help them win contracts and do business with the city. We hired hundreds of formerly incarcerated residents,” the Mayor said. “We helped to push for voting rights for those on probation and parole that can now vote this November. We stood with our undocumented community to fight for them to get drivers licenses and created municipal IDs.”

The Mayor acknowledged the increase in employment of Newark residents in the City’s “anchor institutions,” and reduced unemployment.

Perhaps the biggest challenge after COVID-19 was the lead line replacement program, which the City has met with remarkable success. A new corrosion control program was introduced to tamp down lead leaching from some pipes, and the City has already replaced 15,000 pipes, well on its way to getting the job fully done by the coming spring.

“Since January the city has tested over 2,000 children for lead and have exceeded HUD’s lead abatement program in homes so much so that we received an additional $5.6 million to continue our progress in that area,” the Mayor said.

The Mayor also spoke of $200 million worth of improvement to Newark’s water system, a 382 percent investment increase since he took office.

Another great challenge was “the justifiable anger and outrage over systemic racism” stemming from the George Floyd case.

“But I am proud of my city, of the residents here, the organizers, and the clergy alliance, the activists who knew that the headline would’ve read Newark burns again instead of thousands march for justice for George Floyd and an end to systemic racism. I am also incredibly proud of our police. They demonstrated deep restraint and a desire to continue to mend the relationships with the community, not exacerbate them,” he said. “This is not happenstance. This came with ongoing and steady work under the Department of Public Safety where our Director Anthony Ambrose and recently retired chief of police Darnell Henry has done a phenomenal job to reduce crime and fight to reform a system whose history was littered with very basic and consistent violations of our rights.”

He named the Newark Community Street Team, Newark Street Academy, Newark Anti Violence Coalition, Equal Justice USA, West Ward Victims Outreach and all the organizations affiliated with Brick City Peace Collective from the HUB to Beth Israel Hospital, in helping reduce crime 31 percent overall from 2015 to 2019, including the lowest number of homicides since 1961.

The Mayor spoke of the City’s financial turnaround, through payroll, parking and hotel taxes that brought in $92 million, and refinancing bond sales that will save the City $14 million over two years. Moody’s has upgraded the City’s bond ratings and, even in this pandemic year, saying Newark has a healthy economic outlook.

“The most exciting part of it is that with this funding we will also build a brand new 150-bed homeless shelter and create 100 units of transitional housing for families to help steer them off the road of pervasive homelessness. We will have 100 units using the housing first model for the chronically homeless,” Mayor Baraka said.

The Mayor also announced that a statue of Harriet Tubman would be erected in Washington Park, and the park would be renamed Tubman Square.

“This is just not window dressing,” the Mayor said. “Newark played an integral role in the Underground Railroad and Harriet Tubman’s journey to freedom led her to our city many times in that very area – in a state that was one of the last to acknowledge freedom.”

In acknowledging our own historic times and the continued fight for justice and freedoms, the Mayor delivered this message to President Trump.

“Your narratives are proving false here,” said. “We have arrested less people and reduced crime at the same time. We embrace all of our residents documented and undocumented. We believe all Newark families contribute to the good of our community. We are growing jobs yet still fighting for a better, cleaner environment …  we protect the right for people to love who they want, to see themselves as beautiful, to worship their own faith, and speak multiple languages. We believe in democracy here. I’m not running for your job Mr. President but I will surely be voting the next person to be in that seat on Nov.3rd.

And I’m mailing my ballot in!" the Mayor continued. "And making my mark because Medgar Evers died in his wife’s arms, because Emmett Till’s body still haunts the bottom of the Tallahatchie River, and because it is my right and my duty. It is my responsibility to not just those that came before but for millions that will come after me. And finally because Newark must remain strong and by the grace of God get stronger and we in this time, on this day, will continue to lead the way now, and many years after you are gone! God bless this state and God bless the great city of Newark!”