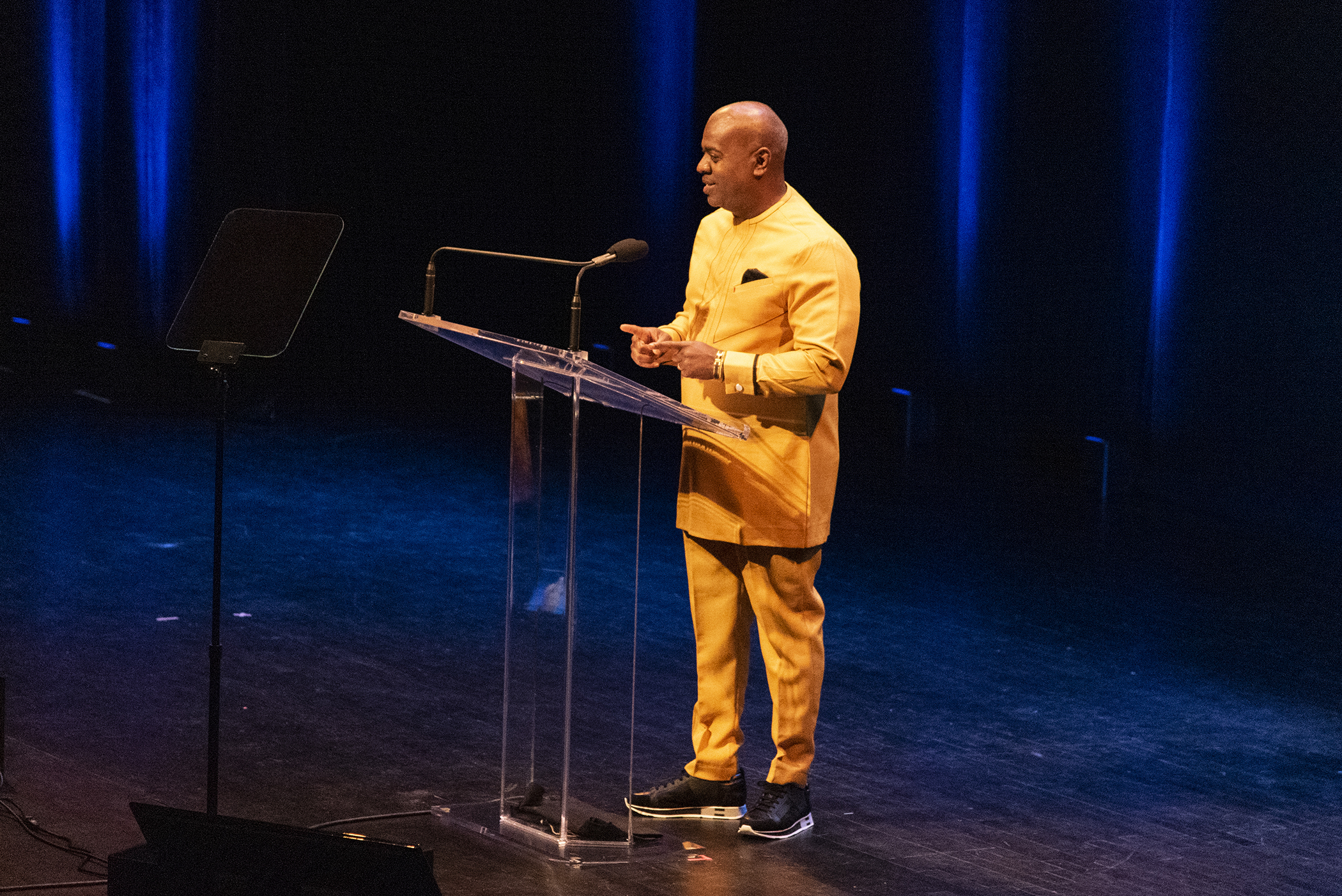 Among the Mayor’s major subjects in the address were the City’s COVID response; the Guaranteed Income Pilot; Public Safety; Housing; Bringing Newark Together; City Operations; Business and Economic Development; and Newark’s Next Steps. Last year’s address was delivered “virtually” due to the COVID-19 pandemic. This year a live audience attended the speech.

“We kept going. We kept believing. We kept moving forward,” Mayor Baraka said. “And we are in a better place because of it. I am from Newark, and I am proud of it! We know the beauty of our triumph, our endurance, our collective will to overcome, and win!

In his speech, the Mayor highlighted the following achievements for 2021:

• Set up 20 testing sites and pop-up sites all over the city and in every ward. Newark provided more than 350,000 tests and brought turnaround time for results down from a week to 24 to 48 hours.

• Set up eight permanent and more than 520 pop-up vaccine sites in the city and vaccinated more than 177,000 residents.

• More than 1,950 residents without addresses and 220 homebound seniors have also been vaccinated.

• More than 65% of all people 12 and up are fully vaccinated and 77% have received at least one shot.

• Newark immediately began to employ contact tracers and our work became a model for the state.

• Newark slowed down deaths in the city precipitously and the infection rate from more than 60% to below 2%.

• Distributed more than 8 million meals with the help of Newark Public Schools, Hello Fresh, and many residents volunteering to take care of their neighbors.

• Newark supported its seniors by completing more than 60,000 wellness checks.

• We opened two hotels to support individuals sheltering in place and who tested positive for COVID-19. Newark also partnered with Robert Treat Hotel to support 149 families.

• The City opened Newark Hope Village, an innovative concept that provided residency for 24 individuals that are now on the pathway to permanent housing.

• 95% of the unsheltered population was given shelter and their test positivity rate remained about 2%.

• Emergency Rental Assistance Program has already helped almost 2,000 families stay in their homes by granting them up to 15 months of rental assistance and aims to help at least 6,000 using $14 million secured from the Biden Administration.

• Office of Tenant and Legal Services provides free legal services to tenants that are facing eviction. Since its creation, Newark has helped nearly 3,000 people stay in their homes.

• Using American Rescue Plan dollars to set aside $20 million dollars to build units that are 30% of the Area Median Income or families of four that make about $34,000.

• The Live Newark program gives residents a forgivable $10,000 loan towards closing costs and $20,000 towards the renovation. So far, Newark has given out 80 closing cost grants and 66 for home repairs.

• Newark has the first and only land bank in the entire state of New Jersey to put land back in the hands of city residents. So far, 85 properties have been transferred to the land bank.

• The city’s Section 8 Home Ownership Program has completed three homes, housed families in them, and are preparing four more homes. $600,000 was given to local MWBE contractors to rebuild these homes.

• Newark has provided more than 5,000 residents with free internet, including 1,000 in low-income housing.

• The Office of Homeless Services, with the help of Bridges, has provided services to more 2,000 people. The office provided 82,000 bed nights and transitioned 155 unsheltered individuals to permanent housing.

• Supported and continue to support small businesses by providing them loans of up to $15,000. In the first three rounds, Newark distributed more than $3.2 million and in the fourth round, city will distribute an additional $2 million more.

• $2 million infrastructure fund that helped local black and brown businesses participate in the lead line replacement program by providing them with up- front capital.

• Record year for the youth employment program by raising $2 million dollars to keep Newark children working throughout the pandemic.

• Launched one of the nation’s largest guaranteed income pilot programs by providing unconditional cash payments to more than 400 Newark residents.

• As Newark continues to push for a Civilian Complaint Review Board in our city with subpoena power, it is also making sure Newark has the best trained and the most prepared officers in the state, that love this city and the people in it.

• Stood up an Office of Violence Prevention and Trauma Recovery and expanded the work Newark has been doing with community-based organizations.

• Moving violence prevention team into the old First Precinct and City is preparing for another class of 150 police officers.

• Graduated the latest class of officers and a class of social workers on the same stage – a first in Newark history.

• Created a parks foundation to improve and manage programing at five downtown parks, because the need for outdoor space became important during the COVID-19 pandemic.

• Trust for Public Land listed Newark 42nd, above Jersey City, in its top 100 park score rankings. Citing the city for having parks within a 10 minutes’ walk for more than 90 percent of the residents.

• While the rest of the country were removing their controversial statues, Newark created a process to deliver a new monument and redesign of Washington Park that honors a shared history of abolition, by creating a new interactive monument of Harriet Tubman.

• Expanding safe passageway to schools in every ward and in multiple neighborhoods.

• Continue to support those that need rental assistance and provide a fourth round of business recovery dollars of $2 million.

• Complete the incredible task of replacing every single lead service line. Newark has become a national model on how to get this done. Newark was told that this project would take 10 years to accomplish. It will be finished in less than three.

• City will support 1,500 new and 200 existing low- and moderate-income homeowners.

• Will convey more property to the land bank suitable for residential development with at least 30% of units developed for residents at or below 80% of AMI.

• Investing $20 million of ARP dollars for families that need it most.

• Go forward with Kawaida Towers with full affordability at various levels, in downtown Newark, the only project of this kind.

• New master plan, Newark 360, is on its way. City will host community meetings in various neighborhoods to make sure focus on health, equity, and resilience. City will have comprehensive engagement with community and stakeholders.

• Fairmont Commons: the conversion of 42 vacant lots into predominantly affordable housing, with $60 million of investment in the area.

• The Dayton Street redevelopment is a plan to replace the vacant and blighted housing project and property in that neighborhood into thriving community that includes new residential units, commercial spaces, along with the opportunity for TV and film production facilities.

• Mulberry Commons pedestrian bridge that was just approved by the State Local Finance Board will connect a walking bridge to Prudential Center arena, Penn Station, and the Ironbound neighborhood. This project will address major transportation needs, connect neighborhoods, and spark hundreds of millions of dollars of development. That will create hundreds of jobs and the 24-hour downtown the entire city has been waiting for.

• Move forward on the Community Museum of Social Justice, which will also serve as headquarters for the Office of Violence Prevention and Trauma Recovery. It will tell the story of decades of struggle in the city from the perspective of community organizations and agencies that pushed Newark to be more democratic.

• Expand the fleet of garbage trucks to include electric vehicles as city continues to make its fleet more sustainable, while providing better service at the same time.

•Community Dashboard with Rutgers will mitigate conflicts across projects in the city. It will provide administration and the community with real visual data on the many services and projects across the city that are happening on a daily basis, so residents will not only know, but become engaged regularly on how Newark grows and represents them while addressing issues at the same time.

“We have an opportunity now to not just get through the storm, but to get to a better place than we were before the storm came,” Mayor Baraka said. “Keep your head up, Newark. We win at the end of this story. I am from Newark and I am proud of it.”

The event was streamed live on Facebook; on Newark’s Government Access Channel, NWK TV (Ch. 78 on Altice/Ch. 28 on Fios); and the city’s web page at www.newarknj.gov.

Mayor Baraka's State of the City speech can be accessed here.