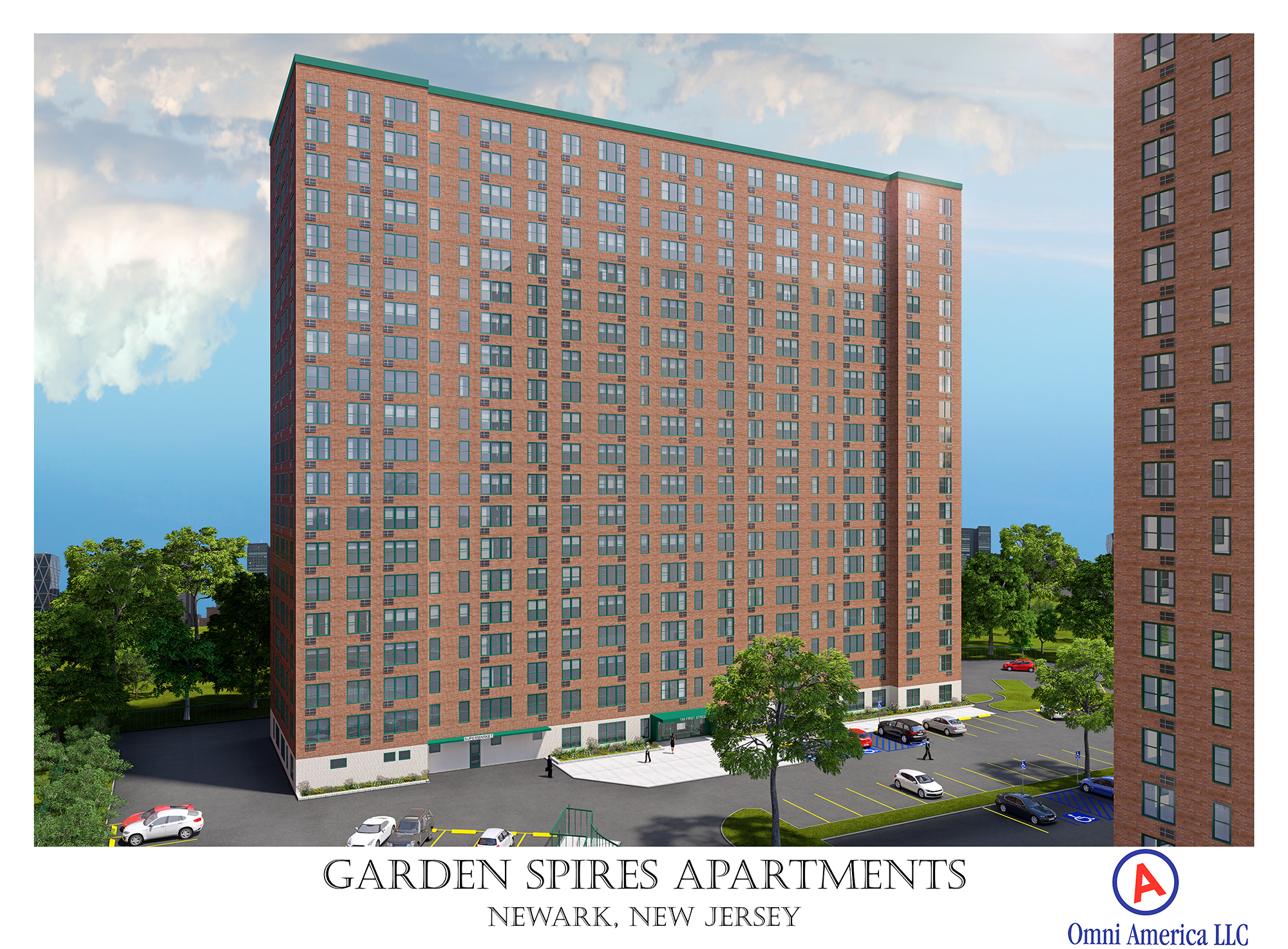 Mayor Ras J. Baraka, Lt. Gov. Sheila Oliver, and former American League All-Star and Most Valuable Player Mo Vaughn gathered this morning at 10:30 a.m. at Garden Spires towers, at 175 First Street, to announce a new beginning for Garden Spires and Spruce Spires with more than $172 million in funding to rehabilitate the two dilapidated and nearly uninhabitable multifamily rental housing complexes that have been plagued by years of neglect and building code violations. The planned rehabilitation by the new owner, Omni America, LLC, will be funded and financed by the State and will remediate all past safety violations and improve the quality of life for more than 650 households who live in the public housing complexes.

Both buildings have amassed hundreds of fire code violations, including missing smoke alarms, malfunctioning exit signs and fire doors, holes in fire-rated walls, and stem valves missing from standpipes. Other building code violations include improper maintenance of heating and hot water systems, lack of child protective window guards, water leaks in units, building and apartment security issues, infestations, and broken electrical and plumbing fixtures and cooking appliances, resulting in more than 2,700 state violations cited by DCA, and hundreds more by the city. As a result of these violations, an elevator in one building plunged 13 stories when it snapped its cable, injuring the passengers, while a young child was able to slip past improperly installed window guards and fall to his death. In 2017, Mayor Baraka filed a lawsuit with the previous owner, First King Properties LLC.

“This is a new day for Garden Spires,” Mayor Baraka said. “We are putting an end to 52 years of mismanagement and neglect that has created appalling conditions and needless tragedy for generations of residents. The tenants of these two buildings will now live in safe, clean, well-maintained homes, our city will gain additional affordable housing, and a threat to public safety and public health will be eradicated. We thank our state partners, and Omni America for their work and leadership. Today, former MVP Mo Vaughn has come to the plate and smashed a long home run to win a big game for Newark!”

“Today marks a major turning point for residents of Garden and Spruce Spires after years of deterioration and deplorable living conditions that residents have had to endure,” said Lt. Governor Oliver, who is also Commissioner of the New Jersey Department of Community Affairs (DCA). “It is a new day as this Administration, in partnership with the City of Newark and new owner, pledge to provide residents a safe and decent place to live.”

“Access to safe, affordable, and adequate housing is a fundamental human right,” said U.S. Senator Cory A. Booker. “During my days as a housing advocate in buildings like Garden Spires and later as Mayor of Newark, I saw firsthand the challenges families face in trying to satisfy this most essential human need. We must all be committed to ensuring each and every Newark resident has the dignity of safe and secure living conditions, and today’s announcement takes a step forward in fulfilling that obligation.”

In addition, as part of its Protect our Kids! Campaign, the U.S. Department of Housing and Urban Development (HUD) also announced today it has reached a settlement agreement with First King Properties LLC and 117 South Fourth Street Realty, for failing to provide decent, safe, and sanitary housing conditions to their residents. HUD provides project-based Section 8 rental assistance for 350 units at Garden Spires and 112 units at Spruce Spires.

The former owners and managers of the federally-assisted Garden Spires Apartments are required to pay $800,000 in civil penalties for not complying with the HUD Lead Disclosure Rule and Lead Safe Housing Rule. HUD previously issued notices to the owners and managers of Garden Spires Apartments informing them that they failed to provide decent, safe, and sanitary housing and failed to comply with the Lead Safe Housing Rule and Lead Disclosure Rule.

“This is a monumental day for the residents of Garden Spires and Spruce Spires who have endured deplorable conditions for far too long, but will finally enjoy the homes they deserve.  As HUD Regional Administrator, we have officially declared war in NY & NJ on absentee landlords who abuse the system and violate the very tenets of humanity by failing to protect children from lead poisoning and provide the fundamental housing standards as required by law.  I want to offer my congratulations to NJ DCA, NJ HMFA, developer OMNI, and the fiscal partners that made this happen; and a special thanks to Senator Rice, former NJ State Senator Jennifer Beck & Mayor Ras Baraka for triggering the series of events that brought us here today.” said Ms. Patton.

The State has provided the new owners with substantial government funds for extensive interior and exterior renovations. These critical improvements will include new roofs, flooring and lighting; new kitchen cabinets, appliances and fixtures; new bathroom vanities, sinks, and bath enclosures; and new building mechanical systems including hot water heaters, boilers and electrical panels, as well as a cogeneration system at Garden Spires. The renovations will also remedy the pre-existing code violations previously noted in this press release.

“The present condition of these buildings reflects the worst we have encountered in our State inspections.  Regrettably, tenants have suffered for years with little hope for change,” said New Jersey Housing and Mortgage Finance Agency (NJHMFA) Executive Director Charles A. Richman. “Today, they can look forward to not only substantially rehabilitated buildings, but a place they can proudly call home.”

Garden Spires, a multifamily development built in 1963, consists of two 20-story buildings located on First Street adjacent to Route 280 that provide 544 apartments for families. NJHMFA is contributing $59.3 million in financing from its Conduit Bond program to the $135.3 million rehabilitation project for this complex. In addition to the improvements already noted, work will include repaving the parking lot, repairing sidewalks and walkways, and upgrading the security alarm system, including the installation of about 400 DVR surveillance cameras.  The complex will include community rooms and laundry facilities.

The two buildings stand on the original 4.3-acre site of the famed Newark Academy, which sold the land to the J.J. Kislak Organization in 1963, when the high school moved to Livingston. The two buildings were originally intended to be a non-profit housing development for moderate-income families. They were opened in 1965. At that time, rents were $108 a month for one-bedroom units, $130 for two-bedroom units, and $149 for three-bedroom suites.

Spruce Spires, which was built in 1920, has 112 apartments spread across four four-story buildings and one five-story building located on Spruce Street and Martin Luther King Boulevard. NJHMFA awarded $16.3 million in financing from the Conduit Bond program to the $37.2 million rehabilitation project for Spruce Spires. Work will include the repair of sidewalks and walkways, upgrades to the security alarm system, and the installation of approximately 100 DVR surveillance cameras.

In addition to financing from the Conduit Bond program, the buildings will receive 4% Low Income Housing Tax Credits from NJHMFA, which will provide the projects with $49.1 million in additional private equity.

No tenants will be displaced during the rehabilitation process in either development. In-place rehabilitation will take approximately 12-18 months in several phases. Most residents will be able to return to their apartments at the end of each day. Work on both buildings is expected to be completed by December 2019.  The cost of rehabilitation per unit is $87,500 for Garden Spires and $122,000 per unit for Spruce Spires.

“Facilitating investment in areas where it is needed most is a key component of Governor Murphy’s vision for a stronger and fairer economy. In this case, that investment means a new, more secure future for several hundred families in the City of Newark,” said Mr. Sullivan. “We appreciate the partnership of DCA and NJHMFA and the leadership of Lieutenant Governor Sheila Oliver in advancing this impactful project.”

Omni America, LLC are experienced owners and managers of affordable housing with over 13,349 units located in New York, Wyoming, Massachusetts, New Jersey, Rhode Island, and throughout the Southeast.

“We are excited to work with city, state and federal officials to bring about the much-needed renovations to vastly improve the quality of life for residents and improve the health of the buildings,” said Mr. Schneur. “We want to thank all of the government and financial organizations that made this deal possible.”

For more information on NJHMFA and its programs, visit: www.njhousing.gov