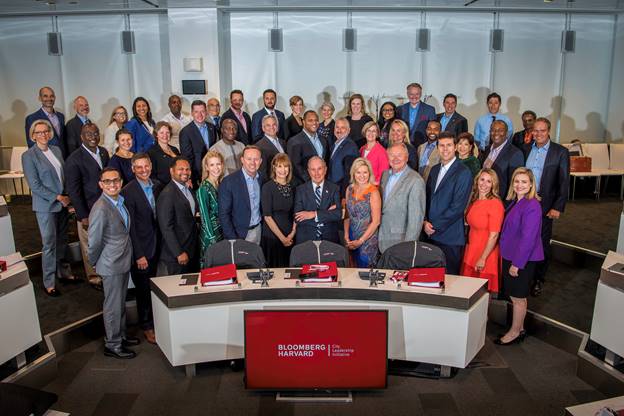 Mayor Ras J. Baraka is ready to explore the latest in leadership and management practices, as one of 40 mayors chosen for an intensive education program with the Bloomberg Harvard City Leadership Initiative.

As a member of the Initiative’s 2019-2020 cohort, Mayor Baraka is part of a class of mayors participating in a program delivered by faculty from Harvard Business School and Harvard Kennedy School as well as world-class experts from Bloomberg Philanthropies’ global network.

The yearlong program launched with a three-day convening for mayors in New York City beginning Sunday, July 14, 2019, which Mayor Baraka is attending at no cost to the city. Each day of the convening, mayors will attend classroom sessions focused on the latest management and leadership practices, using case studies and workshops developed at Harvard.

“Newark is on the cutting edge of urban change, policy, and equitable growth initiatives. We are pleased to be chosen to participate in the Bloomberg Harvard City Leadership Initiative, which will enable us to both learn from subject experts and fellow municipalities and to share with them our innovative programs such as Newark2020, the Inclusionary Zoning Ordinance, and our Peoples Assemblies. Newark is showing America how we lead by example, and we look forward to implementing ideas that we learn from these sessions,” Mayor Baraka said. “I look forward to attending these sessions.”

Collectively, Harvard University and Bloomberg Philanthropies aim to help mayors and their leadership teams manage the complexities of running a city, and to give these leaders opportunities to learn from one another. The Bloomberg Harvard City Leadership Initiative will connect Mayor Baraka to some of the university’s top educators, coaching from experts, a network of peers, and technical assistance. The program provides an opportunity to share practices and learn from fellow mayors about the promising ideas that are already helping to enhance the quality of life in cities around the world.

After the mayors convening, two senior-level city officials nominated by each mayor will attend a convening in August and attend virtual classes throughout the year. From Newark, City Chief Operating Officer Natasha Rogers and Senior Policy Advisor and Communications Strategist Shoshanna Page will participate in the yearlong program, and help Mayor Baraka translate what they learn into organizational changes that improve life in Newark.

Mayor Baraka’s participation in the Bloomberg Harvard City Leadership Initiative, and that of his two senior leaders – including tuition, accommodation, meals, and airfare – is fully funded by the program thanks to Bloomberg Philanthropies.

The Bloomberg Harvard City Leadership Initiative is a collaboration among Bloomberg Philanthropies, Harvard Business School, and Harvard Kennedy School. Its mission is to inspire and strengthen city leaders as well as equip them with the tools to lead high-performing, innovative cities.