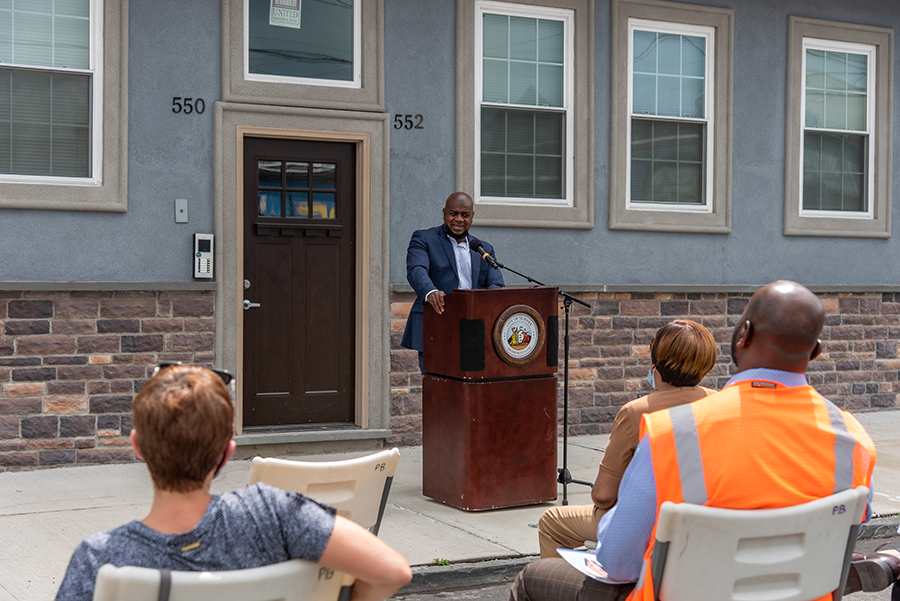 Newark, NJ-August 9, 2021- As part of Newark’s Equitable Recovery Summer, Mayor Ras J. Baraka today announced a set of bold affordable housing goals to guide the City’s housing and development efforts over the next five years – including the allocation of American Recovery Plan funding.

“An equitable city is built on the foundation of affordability,” said Mayor Baraka. “Our new housing goals and the actions outlined to achieve them will help us ensure all Newark residents have access to safe, decent, and affordable housing and that our city continues to be a vibrant gateway to opportunity for all, regardless of income, race, ethnicity, or immigration status.”

Newark’s goals represent a significant increase in the number of affordable units created and preserved in the city as well as in the number of residents served by City-funded homeless, tenant and homeowner assistance programs. Between 2015 and 2020, the City created or preserved 3,514 homes. The five-year goals continue the city’s focus on production, preservation, and protection, calling for the City to:

The goals were developed through a Housing Working Group convened by the Mayor with more than 30 representatives from community-based organizations, non-profits, developers, housing advocates, private companies, Municipal departments, the Newark Housing Authority, and Invest Newark. The Working Group, led by the Office of Affordable and Sustainable Housing with support from Bloomberg Associates, worked over the past eight months to review the City’s past housing efforts, understand current programs, and create quantitative housing affordability targets to meet the vision of Newark Forward.

The Working Group’s efforts were guided by Homes Beyond Reach: An Assessment and Gap Analysis of Newark's Affordable Rental Stock, released in February by the Rutgers Center on Law, Inequality and Metropolitan Equity, a report co-authored by Working Group Member David Troutt, which detailed the affordability gaps in Newark’s rental stock, as well as input and recommendations from the City’s Equitable Growth Commission.

“I want to thank the Housing Working Group for creating bold but achievable goals. Their work sets a clear direction for Newark and will shape our collective housing efforts as we recovery from the pandemic and reinvest in our communities,” said Deputy Mayor Ladd. “The housing goals provide a roadmap to ensure we maximize funding from the American Rescue Plan, Treasury Emergency Rental Funds, and American Jobs Act, as well as state and local sources, to meet the needs of Newark’s most vulnerable residents.”

“It has been a pleasure to work with the City on this bold planning initiative,” said Director Cirilo. “The Housing Authority has pledged its development capacity to assure that Mayor Baraka’s and the City of Newark’s affordable housing creation and preservation goals are met.

“Prior to the pandemic, cities across the country were struggling to maintain their affordability. COVID-19 and the ensuing economic impacts have only deepened this challenge,” said Adam Freed, Principal with Bloomberg Associates. “The goals adopted by Mayor Baraka and the work of the Housing Working Group set a bold and transparent direction for Newark and are a national model for data-driven, inclusive action to achieve a more equitable and affordable city.”

Mayor Baraka has recently launched several initiatives that will help achieve the targets announced today, including a $20 million investment to support the creation of units affordable to Newark families earning $32,000 or less and more than $14 million in Emergency Rental Assistance to help Newarkers impacted by COVID-19 pay their rent and utilities.

The Five-year Affordable Housing Goals are the sixth announcement in a package of recovery initiatives that Mayor Baraka is launching as part of the Equitable Recovery Summer, including:

A full copy of the 5-year Affordable Housing Goals can be found at https://bit.ly/nwk-housing-goals.