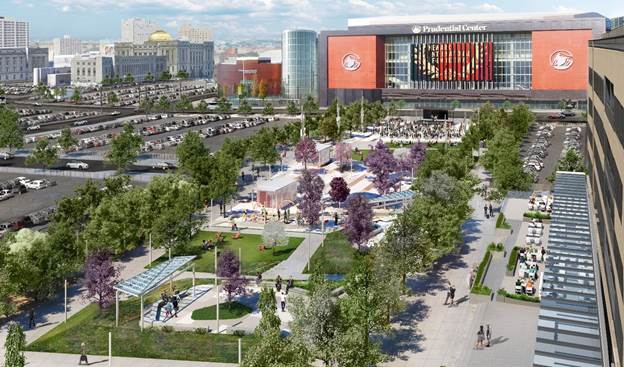 Mulberry Commons is recognized as a milestone in Newark’s economic development, creating a new center of gravity in the City’s growing downtown and unlocking the long ignored development potential of Newark’s Penn Station, one of the nation’s busiest rail hubs.

“The creation of Mulberry Commons is a defining and signature moment in the history of Newark,” Mayor Baraka said. “We have long insisted that the creation of the Prudential Center not be a stand-alone project in our downtown, and that this entertainment facility provide more than just world-class events – it must bring real estate development, jobs, and prosperity to our entire city. Today we are keeping that covenant with our residents with this groundbreaking. Soon this entire area will be a thriving 24/7 neighborhood of housing, shops, and restaurants, attracting visitors and new residents, empowering our economy, and strengthening our city. I congratulate the entire team that made this day possible and look forward to seeing the final results.”

Mulberry Commons draws upon “living system” concepts including landscape architecture, walkability, urban lifestyle, and ecology. Leading the design efforts for the six of the project’s 22 acres is the award-winning architectural firm Sage & Coombe Architects and Supermass Studio Landscape Architect. The open space development will also open up a vast area of undeveloped land to residential and office development.

“The creation of Mulberry Commons as a World-Class Park and development will be an economic and recreational center for Newark residents, while making our downtown a destination for visitors. With the Prudential Center, the shops, the dining, and the Mulberry Commons itself, we will have people coming to Newark to seek housing, shopping, and recreation opportunities instead of people travelling outside the City,” said Deputy Mayor Garcia.

Mulberry Commons is projected to net fiscal benefits to both the City and State in excess of $400 million 30-year Net Present Value. A significant aspect of Mulberry Commons will be a proposed bridge that is a direct connection to the tracks of Penn Station. The total estimate cost of the bridge – which will resemble New York City’s High Line – is approximately $30 million and with its addition will bring approximately 5,600 jobs to the downtown area, in addition to more than 5,000 construction jobs. Mulberry Commons is slated to open in late September 2018.

“Public spaces and parks are critical to urban development and can create tremendous positive impact for the City, residents, and its visitors” said Ms. Glover. “Mulberry Commons will not only serve as a beautiful setting, but will help bolster local businesses and support job creation. We know economic development is truly interdisciplinary and appreciate all the stakeholders and partners who helped make this development possible.”

Overall, the project will increase foot traffic in Newark’s downtown, create regional connectivity between the PATH, NJ Transit, Newark Light Rail, and Amtrak lines. It will be flanked by Prudential Center, home to the Grammy Museum Experience, and be the west end of Ironside Newark, a $80 million, 465,000-square-foot mixed-use project constructed by Edison Properties on the east end.

“The commitment made by the city of Newark to build Prudential Center has resulted in more than 15 million visitors to the city for concerts, family shows, and sporting events over the last decade, making the venue one of the busiest in America.  Mulberry Commons is simply the latest project in the renaissance of Newark, solidifying it as a place people live, play, and work,” said President of HBSE, the New Jersey Devils and Prudential Center Hugh Weber. “We are proud to be part of the development of this gathering place and what it will mean in improving the lives of people who call Newark home and enhancing the experience of those who visit.”

“Today represents a critical milestone not only in the construction of Mulberry Commons, but in the City of Newark’s revitalization led by Mayor Baraka,” said Edison Properties’ Chief Operating Officer Ben Feigenbaum. “Earlier this year, Edison Properties kicked off the redevelopment of Ironside Newark, a modern, mixed-use project that will add jobs, dining and retail options to this already dynamic area of the city. Mulberry Commons Park will add critical green space to the mix, beautifying the area while creating a destination where residents, workers and visitors will congregate. We look forward to standing alongside Mayor Baraka as his vision for Mulberry Commons advances and Newark further evolves into a 24/7 city.”

“This is a tremendously exciting and important project, one that will radically change the face of Newark, uniting the five wards, linking the downtown to the Ironbound and Riverfront Park beyond, and creating an essential connection to the tracks at Penn Station,” said Jennifer Sage of Sage and Coombe Architects.

“J&L Companies is proud to be a partner in bringing to life Mulberry Commons, a landmark project that will serve as a blueprint for how public and private partners can work together to benefit an entire metropolis. As a family-owned and operated company with close to 50 years in Newark, we look forward to working with the various stakeholders as well as the broader Newark community to capture the economic, artistic, and cultural vibrancy we’ve always known the city to have. J&L Companies is committed to Newark’s past, present, and future, and we want to ensure Mulberry Commons is for everyone – Newark natives, the next generation of Newark residents, visitors, students, and professionals alike,” said J&L Companies Principal Jose Lopez.