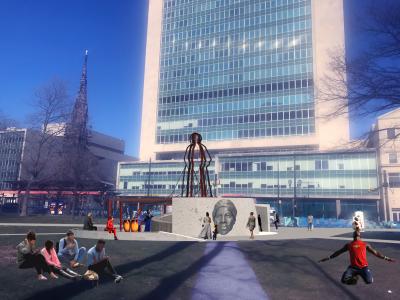 Newark, NJ – June 17, 2021 – Mayor Ras J. Baraka announced today that artist Nina Cooke John’s design for the Harriet Tubman monument has been chosen to replace a statue of Christopher Columbus, which was removed last summer in Washington Park. The park and the surrounding area that includes the Newark Museum of Art and Newark Public Library will be renamed Tubman Square in honor of the pioneering abolitionist, during the summer of 2022, when the new monument will be installed.

“Nearly one year after our nation’s racial reckoning and just in time for this year’s celebration of Juneteenth, we are proud to announce the design selected for our new Harriet Tubman monument,” Mayor Baraka said. “It is only fitting that we memorialize Tubman’s heroic efforts leading enslaved Africans to freedom via the Underground Railroad at this time of year when we celebrate the emancipation of enslaved people in the United States. Ms. John’s work of public art will be a symbol of hope and optimism for generations to come, not only for our Newark community, but also for the entire country.”

Ms. John’s design “Shadow of a Face,” envisions the renamed park as a place of pilgrimage where people will visit from all corners of Newark and beyond to learn about Tubman’s life and journey.

“As a woman, a Black woman, and mother of three girls, I am delighted to bring my memorial for Harriet Tubman to life in Newark,” said Ms. John. “My design creates a welcoming space for people to connect with Tubman as well as interact and reflect on their own liberation from whatever weight they might be carrying. This is a monument for the community and by the community.”

The circular monument will guide visitors throughout a multisensory experience. Featuring a larger-than-life profile of Harriet Tubman, the work lets visitors connect with her at eye level on a foundational wall where her face will be reflected in a mosaic made of large ceramic pieces. The texture of the mosaic is repeated at different scale on the ground and inner walls. Text throughout the area highlights important dates in Tubman’s life and the names of safe houses throughout New Jersey.

“Nina’s design uniquely blends the abstract with realism and reimagines what a monument can be and who it represents,” said Salamishah Tillet, Rutgers University-Newark Professor, New York Times critic, and juror who served on the selection committee. “Through her concept, she’s actively created a place where the community can gather, remember, learn, and even rest. Such spaces are rare and necessary now more than ever.”

Ms. John is the founding principal of Studio Cooke John Architecture and Design, a multidisciplinary design studio that values place-making to transform relationships between people and the built environment. She is also a member of the Black Artists + Designers Guild Collective and was recently named one of Elle Decor's A-List top 100 Designers. She is based in Montclair.

“I was thrilled to discover Nina Cooke John’s work through this selection process as it brought a fresh approach to redefining monuments,” said Linda Harrison, CEO and Director of the Newark Museum of Art. “Her commanding monument of Harriet Tubman and the history of the Underground Railroad will spark both reflection and action among Newarkers and visitors to Tubman Square. It is a privilege for us to have her work impact our City for generations to come.”

John will work with Newark-based artist Adebunmi Gbadebo as an apprentice to assist with research and community engagement throughout the project. In her practice, Ms. Gbadebo creates sculptures, prints, and paper that reflect on the legacy of specific sites of slavery and incorporate hair sourced from people of the African diaspora.

To select the design for the new monument, the City’s Director of Arts & Cultural Affairs fayemi shakur spearheaded an open call process last winter through which five artists were commissioned to produce conceptual designs for a monument inspired by the history and legacy of Tubman and the Underground Railroad, which historians have determined included locations within Newark. The Harriet Tubman Monument Project aligns with the Division of Arts and Cultural Affairs’ goal to develop a world-class public art program for the City of Newark.

Community members were invited to provide comments and feedback on the finalist designs, which were taken into consideration by the selection committee, a 14-member jury of art experts, historians and community stakeholders, during their review. The jury members’ names and bios can be found here.

The artist selection and community feedback process was designed and facilitated with the support of the Cultural Assets Management team at Bloomberg Associates, the pro-bono municipal consulting arm of Bloomberg Philanthropies.

“Newark’s new Harriet Tubman monument underscores the role public art can play in shaping the identity and quality of life for our cities,” said David Andersson of Bloomberg Associates. “We hope Mayor Baraka’s leadership on this project and the creativity and commitment of the artists and citizens who participated in the process are an inspiration to communities everywhere.”

Newark residents who would like their family names or organizations to be a part of this historic project can donate and have their names included in the design process. Donations will be administered by Newark Arts, the city's local arts agency and fiscal sponsor on this project. To donate, visit NewarkArts.org.