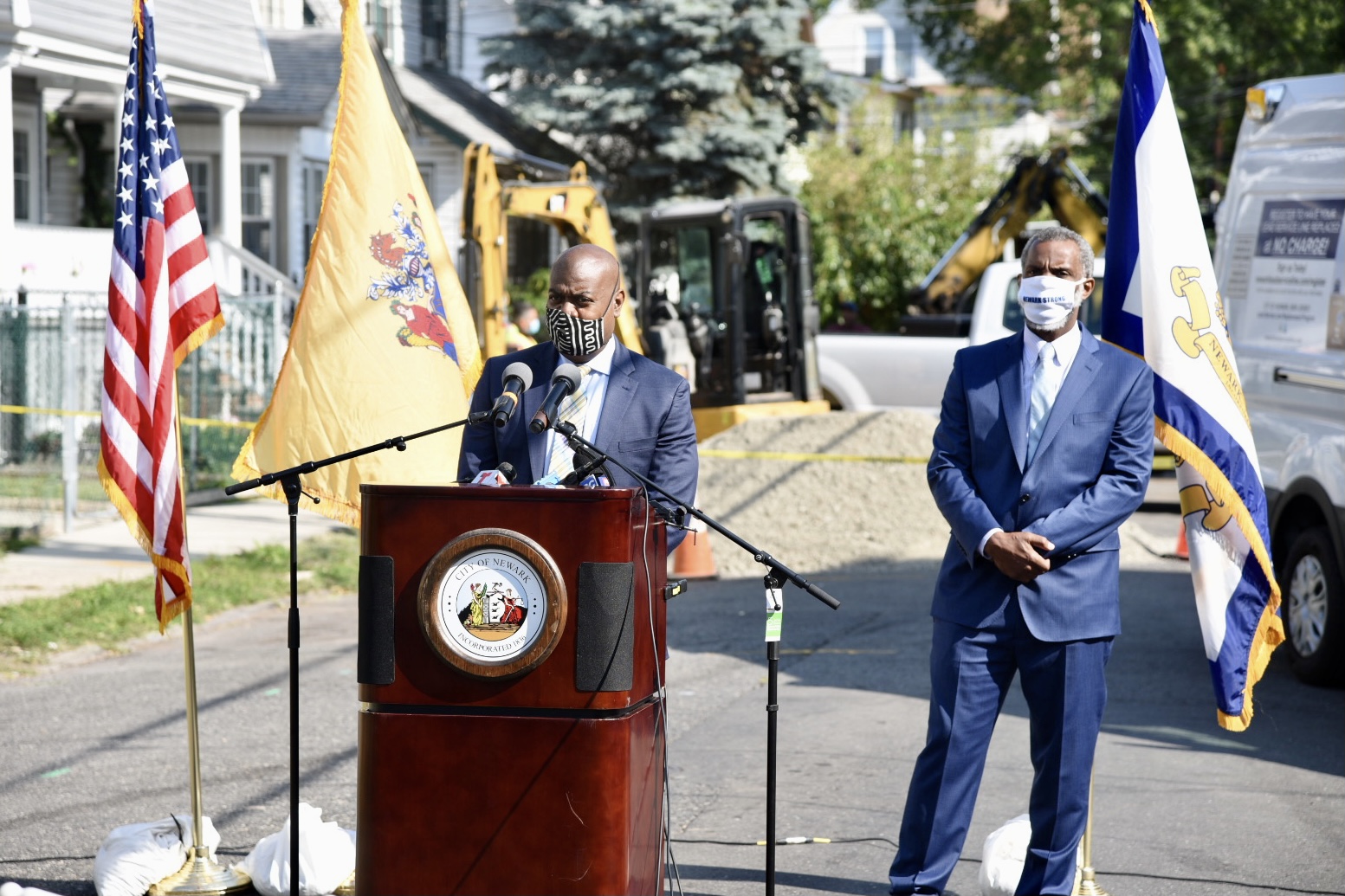 Newark, NJ – September 21, 2020 – One year after putting to work a $120 million bond from Essex County and joined by Essex County Executive Joseph N. DiVincenzo Jr. and a group of City, State, and County Officials, Mayor Ras J. Baraka announced that the Newark Lead Service Line Replacement (LSLR) Program had reached its final stage with nearly 15,000 of the City’s 18,000+ lead service lines replaced with safe, copper pipes at no cost to taxpayers or residents.

“From the beginning, this hasn’t just been about lead lines, but about securing our community’s health, safety and quality of life—today and into the future,” Mayor Baraka said. “I am delighted to share, that barring unforeseen circumstances, Newark will not only remove every last lead service line in our city but well ahead of schedule—perhaps even by the Spring.”

“With remarkable commitment, Newark has replaced lead service lines at a scale and pace never before seen, setting an example for the nation,” said New Jersey Department of Environmental Protection Commissioner Catherine R. McCabe. “We applaud Newark Mayor Ras Baraka and his team for their resolve in confronting what is a national challenge—aging water infrastructure—and protecting the health of Newarkers for generations to come.”

“Whenever we’ve identified water quality challenges, we have been able to move swiftly and decisively to fix them with coordination with NJDEP and USEPA,” said Director of Newark Water and Sewer Utilities Kareem Adeem. “The Newark Department of Water and Sewer Utilities can do the work below ground because our partners in the City, County, and State financial areas do their parts. Whether it’s implementing cutting edge filtration or scale protocols or AI-assisted water quality management, we can innovate because they do.”

The City worked with the County of Essex, whose Aaa bond rating allowed for cost savings of 7% or $9.6 million over a City bond issuance.

“Last year, we all knew that replacing the service pipes was the only long-term solution to address the high levels of lead in Newark’s water,” said Essex County Executive DiVincenzo. “With our Aaa bond rating, we were able to front the City with the funds to expedite the replacement work. On the first anniversary of this partnership, we are able to see what can be accomplished to protect the health and quality of life of our residents when governments work together and share their resources.”

The lead service line replacement program is only the latest in a series of recent events, which evidence the fiscal health of the City. Last month, the Mayor announced a strong investor response to Newark’s $100 million General Obligation Refunding Bonds, Series 2020 transaction, evidence that there is confidence in the City’s financial health.

“Our financial team has created a refinancing structure that will generate nearly $15 million in service savings, $14 million of which will be realized in 2020 and 2021,” Mayor Baraka said. “This improved cash flow will help to mitigate some of the financial impact of the ongoing COVID-19 pandemic.”

A Moody’s Investors Service report said the City’s strong operations are expected to continue with ongoing redevelopment and a significantly improved financial position. Since 2015, the City has grown its surplus by 112%, a notable improvement considering its zero-fund balance in 2014, when Mayor Baraka took office.

“Aging water infrastructure has impacted not only the City of Newark, but communities across New Jersey and our entire nation,” said Governor Phil Murphy. “Today’s announcement builds on the State’s commitment to replacing lead service lines within the next ten years to provide every resident with access to clean and safe drinking water. I want to thank Mayor Baraka and County Executive DiVincenzo for their tremendous leadership to protect families and children from the dangers of lead contamination.”