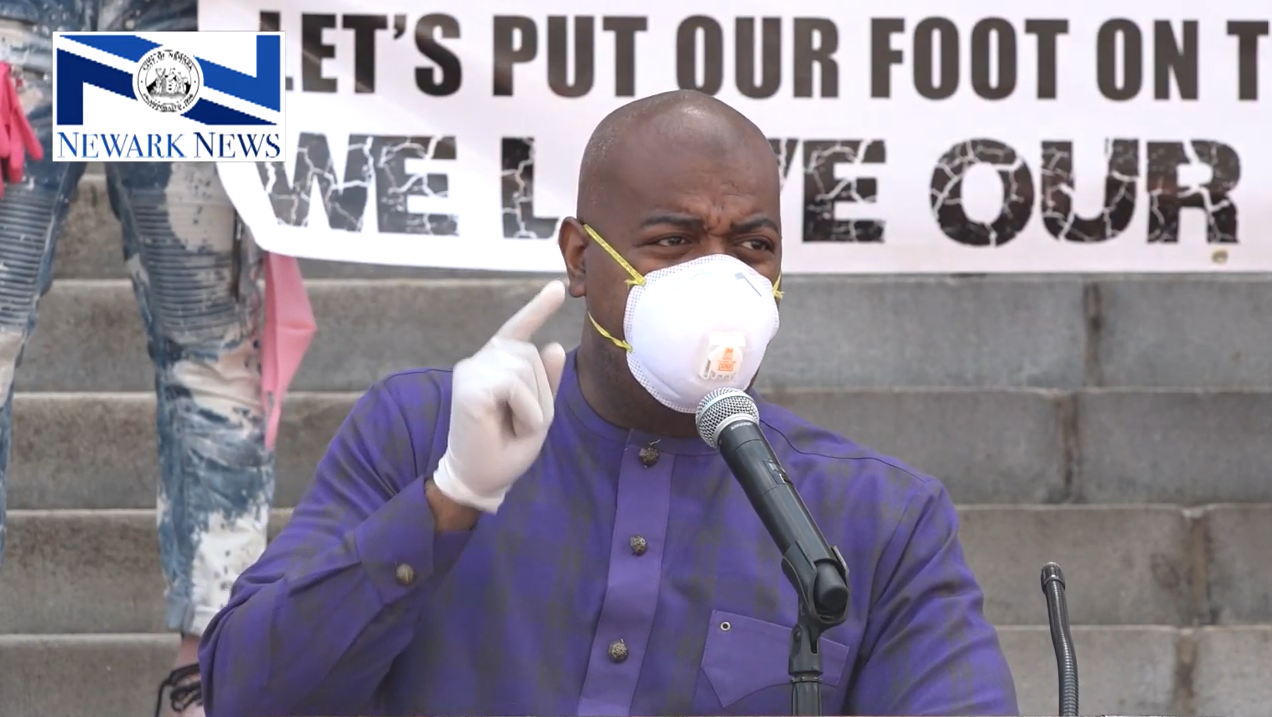 Mayor Ras J. Baraka and Larry Hamm go way back. Even back before the Mayor was born.

Larry Hamm is founder of the People’s Organization for Progress (POP) which held a rally yesterday to protest the death of George Floyd at the hands of Minneapolis police.

A crowd of about 3,500 people gathered at the base of the “Seated Lincoln” statue in the Essex County Historic Courthouse Plaza as Larry Hamm and Mayor Baraka gave impassioned speeches about systemic and endemic police brutality, especially black men.

Earlier, Mayor Baraka held a press conference on the steps of City Hall, which was streamed live, at which Larry Hamm also spoke.

Both implored the crowd to express their anger, but to keep the focus on national police brutality and not let media and certain political forces “change the narrative,” as the Mayor said, through destruction.

“Newark has been here. For four days in 1967, this City went up in flames,” Mayor Baraka said emphatically from the steps of City Hall. “We were injured. And we still haven’t recovered from, socially, economically or politically.

In front of the Lincoln Statue, Larry Hamm delivered the same message.

“We are here to march and protest the death of George Floyd, if you’re here to do something different, you’re not with us,” he said, repeating the message three times.

Public Safety Director Anthony F. Ambrose decided to keep police presence at a minimum during the march, and Newark officers were only on hand to direct traffic.

Later in the evening, well after Larry Hamm’s march had ended, there was a tense demonstration outside the First Precinct, but resulted in no violence and no arrests.

After setting the tone for a controlled march during the City Hall press conference, the Mayor recounted his history with POP.

“I marched with Larry when I was kid,” the Mayor said, recalling a protest over the death of Earl Faison, who died in Orange police custody as a wrongly accused suspect in the murder of Orange police officer Joyce Carnegie in 1999. “Larry has been marching and protesting police violence for over 50 years.”

In recounting historical police violence against African-Americans, Mayor Baraka spoke about how police brutality was “deeply personal” to his family and how it sparked the 1967 uprising that profoundly changed the course of Newark history. A protest following the beating of a cab driver turned violent, resulting in 24 civilian deaths, and the death of a Newark police officer and firefighter. Hundreds were injured and blocks upon blocks of property and businesses destroyed.

“There is a famous picture of my father, blood coming down his face, chained to a wheelchair in the hospital,” the Mayor said. “And the cop who clubbed him was a classmate of his at Barringer High.”

It was during those times, Larry Hamm was mentored by Amiri Baraka, Sr., and his wife, Amini, the Mayor’s mother. He was in middle school but already destined for social justice activism.

Two years ago, Hamm held a rally to commemorate the birthday of Rosa Parks at her statue at the Essex County Veterans Courthouse. Mrs. Baraka came and said, “Larry was like another son to Amiri and me. We thought he'd go into politics, but it worked out fine. We got a mayor in City Hall and a mayor in the streets."

The Mayor was born nearly three years after the uprising, about the same time 17-year-old Larry Hamm was leading his first march.

For many years now, every Monday, Larry Hamm’s POP holds a march against police brutality outside City Hall, in the street below the Mayor’s window.

“People’s Organization for Progress has been having protests in our city for decades without incident, without issue,” Mayor Baraka said on the City Hall steps, two before the protest was set to start. "They’ve been very consistent in fighting against the injustices that have been happening in our country.”