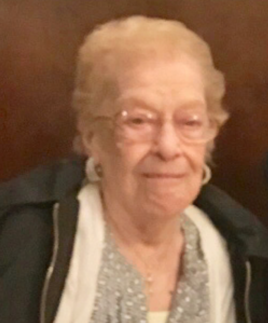 Mary Ambrose lived in Newark for nearly a century, never going much further than the North Ward block where she was born.

Mary Ambrose, 95, passed away Sunday, May 17 at Clara Maass Hospital after a brief illness. While her death was not caused by the COVID-19 virus, in some ways it was COVID-related.

“The last couple weeks were tough on her,” Director Ambrose said. “She said, ‘I can’t stand this pandemic. I turn on the TV and all I see is death, death, death.’ She went to church every Saturday afternoon at St. Francis, and she couldn’t do that. She got her hair done every Friday, and she couldn’t do that. She couldn’t have her girlfriends over for lunch. When you can’t live the way you want, it saps your will to live, especially at that age.”

Up until the time of her death, Mrs. Ambrose was a lively, neighborhood watchdog who didn’t hesitate to report things to her son.

“Last week she called me and said, ‘I just saw a cop drive by without a mask on. He should have a mask on,” Director Ambrose said. “She always knew what was going on in the neighborhood and always told me … there are sneakers hanging over the wires … cars aren’t moved for the street cleaners …  somebody got a car stolen … All our residents should be that vigilant.”

“And yet she was tolerant of some of the young troublemakers,” he said. “She used to say to me, ‘You were no angel as a kid.’”

Mary and her husband, Anthony, who died in 1982, built their house on North 4th Street in 1958 and raised their family, which included Director Ambrose and his sister, Beverly.

Since that time, she stayed through the changing demographics of the neighborhood, even after she was widowed.

“People would say to her, ‘Newark is changing,’ and she’d say, ‘So what? Every city changes,’’ Director Ambrose said. “When the city changed, she just made new friends. She loved Newark and when I say she never left, I mean she never left. She took one trip in her life to Las Vegas, 50 years ago.  Other than, she never really went further than the Jersey Shore.”

In addition to Director Ambrose and his sister Beverly Magliacano and her husband Bobby, Mrs. Ambrose is survived by grandchildren Robyn, Toni and Jodi, and great grandchildren Luca and Alessandra. Services for Mrs. Ambrose were private, but donations may be made to St. Francis Xavier Church, 243 Abington Avenue, Newark, N.J. 07107.