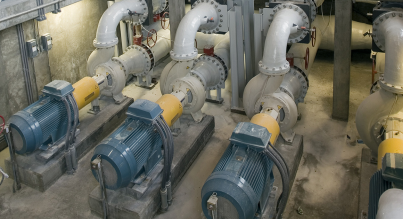 NEWARK — U.S. District Judge Esther Salas ruled against the Natural Resources Defense Council in its ongoing lawsuit challenging Newark's failure to provide relief to residents who'd consumed drinking water with elevated levels of lead. She shut down an emergency motion that would have required the city to offer free water filters to homes located in the East Ward.

In court on Tuesday, Salas assailed NRDC Counsel Claire Woods for failing to provide adequate support for some of the claims made in the motion, which alleged the city was misleading its East Ward residents on the safety of their drinking water. The motion, which the NRDC filed with the U.S. District Court of New Jersey on Dec. 8, would have required Newark to expand its ongoing distribution of water filters to residents serviced by the Pequannock Water Treatment Plant.

The city began distributing water filters in October, shortly after receiving a report from environmental consulting firm CDM Smith that found residences serviced by the Pequannock plant — which are largely located in the North, Central, South and West Wards — were at high risk of lead exposure.

Chemicals used to prevent lead from flaking off the sides of aging lead service pipes had stopped working, according to the study. A change in the water's acidity was cited as a possible factor that reduced the effectiveness of the plant's ability to control lead corrosion.

Homes located in the East Ward, which is serviced by the Wanaque Water Treatment Plant, were largely believed to be unaffected by the crisis, according to the report. The NRDC's emergency motion asked that the city be required to expand its water filter distribution program to include East Ward residents.

"Based on the current sampling and surveying, the plaintiffs did not meet their burden" to demonstrate that Newark residents serviced by the Wanaque site faced an immediate danger to their health, Salas said on Tuesday. "We can't say something is happening without proving something is happening."

Salas appeared visibly agitated with the NRDC's motion at several points throughout Tuesday's hearing, admonishing the organization's attorney for failing to include certain exhibits in her motion, which cited older data that predates the most recent half-year sampling period the city submitted to the Department of Environmental Protection.

Recent data, which the City of Newark's attorney Eric Klein cited in court, pegged the lead levels taken from 90 percent of Wanaque sites as being well below the federal action level.

That said, there have been instances of high levels of lead found in water at East Ward homes. One residence in the Wanaque service area was recently found to have more than 12 times the federal limit of lead, possibly due to blending of water treated by the Pequannock plant into East Ward homes typically serviced by Wanaque, according to the NRDC's motion.

The city would only have been compelled to act, however, if recent data suggested a similar widespread failure of the Wanaque system for keeping lead from leaching from lead pipes into drinking water — which isn't borne out by the most recent data. Just 6 percent of the Wanaque samples taken in the first half of 2018 exceeded 15 parts per billion of lead, according to the CDM Smith report.

"The court here recognized that Newark is doing what it has to do," City of Newark Corporation Counsel Kenyatta Stewart said following the ruling. "We were here less than a month ago, and another judge gave us a schedule that we were all expected to follow, and we were all surprised when we got a second brief."

The NRDC, along with the Newark Education Workers Caucus, brought its lawsuit against Newark in June, alleging city and state officials had failed to address "repeated, systemic failures [and] to follow federal rules designed to protect the public from dangerous lead exposure."

The CDM Smith study, which the city commissioned in February, found that 10 percent of water samples collected in 2015 from sites served by the Pequannock plant showed more than 15.8 parts per billion of lead. Even after commissioning the CDM Smith report, Newark officials repeatedly told residents that the crisis was limited to a handful of homes and that its water was largely safe to drink.

Prolonged exposure to lead has been shown to cause developmental disabilities in children and can lead to more severe health complications in the long term. The city, along with the Department of Health, is encouraging doctors and parents to have young children tested for lead exposure.

"We went to court today to call attention to the citywide problem of lead exposure in Newark. Our purpose is to ensure that everyone has access to safe drinking water and that the City of Newark prioritizes the health and well-being of its residents," Woods said in a statement following the ruling. "We'll continue to fight for safe water."

The next hearing is expected to be held in March, according to city officials. The date will be finalized when discovery is completed.