How Newark is Getting the Lead Out 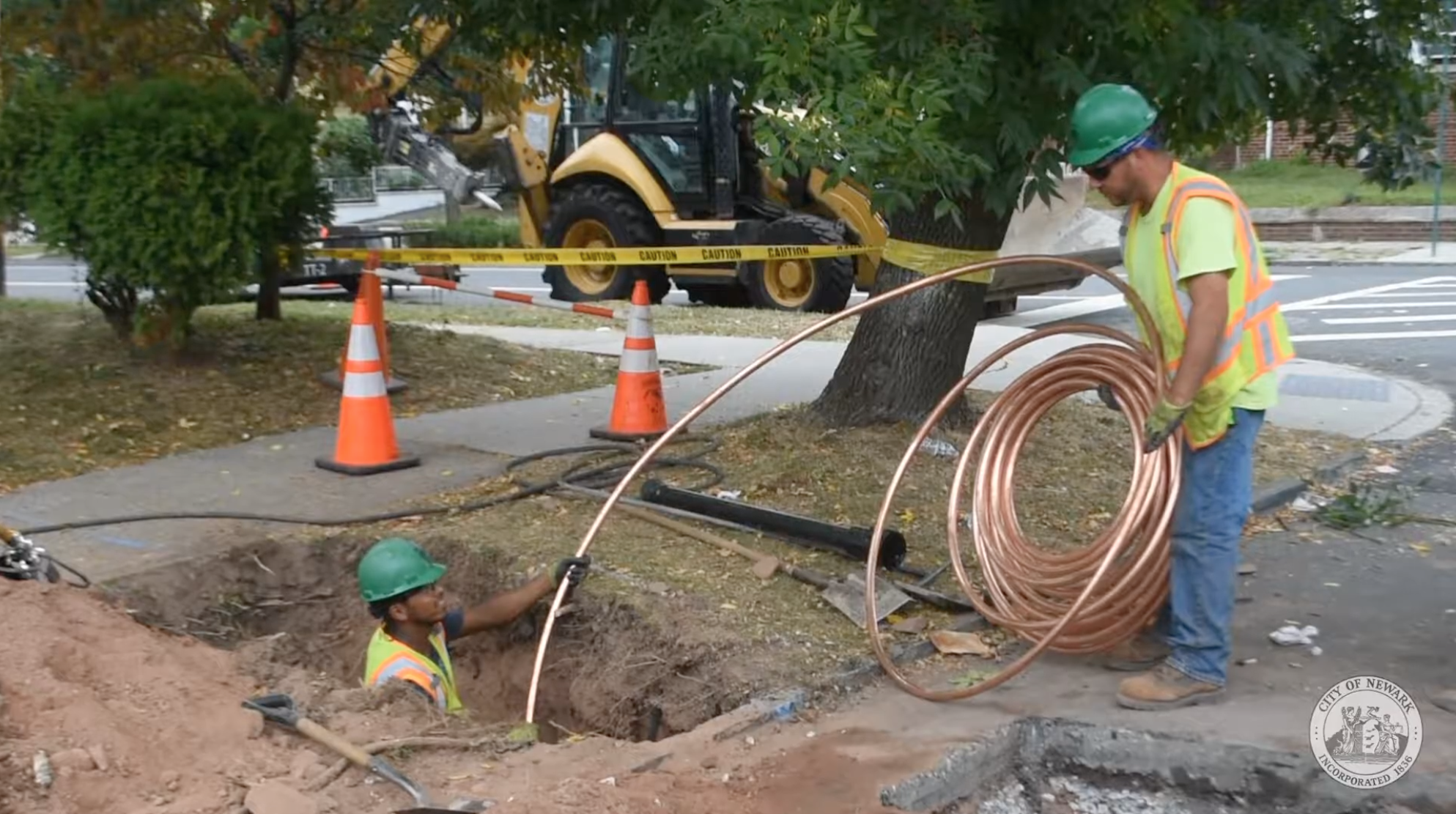 Mark Robertson was both worried and relieved.

Mr. Robertson, a Newark native and real estate entrepreneur here, was standing on his home’s front lawn at 631-633 Sanford Avenue today, watching a work crew from Pacific Construction, replace his lead service water line with a new copper one.

All across Newark, teams from three contractors – two of them city-based – are replacing privately-owned lead service lines that provide water from city water mains to private homes, five days a week, first going through the list of applications that were made as early as April 2018, methodically performing the tasks a house at a time, doing usually two to three houses a day, as each house takes an average of four hours. With backhoes, jackhammers, dump trucks, copper pipes, shovels, “moles,” and an abundance of experience and professionalism, the crews leave behind a safer, cleaner, and healthier Newark in their wake at every house.

The crew was having trouble with the hilly nature of his lawn, an underground gas main, and a 12-inch water main that serves as a feeder to smaller six-inch water mains pipes that in turn supplies lead service lines, that directly feed homes. The crew had created four holes for this job, one in the street at the water main, one at the gas pipe, one under the sidewalk, and a fourth on his lawn to remove the roots of a tree that had been torn out after Superstorm Sandy. The roots were making it difficult to snake the new copper pipe through the ground.

“I’m relieved because this work will make my house healthier for me and my two tenants,” he said. “But I’m worried that they might not replace the sidewalk exactly as it was, which could be a safety hazard.”

Moments later, Acting Director of Water and Sewer Utilities Kareem Adeem, on hand to check on the progress of this one of many projects in the Newark Lead Service Line Replacement program, told Mr. Robertson personally that the sidewalk would be restored temporary and after a short settling period, a permanent restoration.

Director Adeem had more good news for Mr. Robertson, who signed up for the replacement program four or five months ago: “You don’t have to pay the $1,000.”

Under the original Lead Service Replacement, applicants could pay up to $1,000 for the work, depending on the cost. Under the new Municipal Ordinance and $120 million bond funding, the administration is replacing every single lead service line in the City of Newark at no cost to taxpayers.

Sean McGowan, of CDM Smith of Edison, explained the process, which his company oversees and inspects. He did so while scrutinizing the work done at a home on North 7th Street, which passed muster.

“The city gives us an address and we inspect houses and check the water meter to see what kind of pipe is there,” Mr. McGowan said. “For the most part, there are only two basic types: lead and copper. Then we test the curb stop, where we can check the curb-to-meter pipe, and curb-to-main pipe.”

The curb-stop is a way point under sidewalks that the Department of Water and Sewer Utilities uses to cut off water service to a home that has not paid its water bill or in case of an emergency.

“If we find lead, one of our contractors sets up the replacements. To schedule that, we work with the homeowner to set up a date when they’re home and we can gain access to their water meter,” Mr. McGowan continued.

Mr. McGowan has found it easy to work with Newark’s homeowners. “They’re happy to see us,” he said. “Often they’re curious about the process.”

After the work is done, Mr. McGowan inspects it, and prepares a report to Director Adeem on the efficiency of the operation, insuring accountability at all levels. Director Adeem personally reviews the reports with CDM Smith. “I go over everything,” Director Adeem said. “We don’t miss anything.”

A few blocks away, at 475 North 7th Street, a team from Newark-based E&G Roman, based on Ogden St, was hard at work replacing that home’s lead pipe. They were doing so with the trickier of the two methods to do so: the “mole,” also known as the “bullet.”

Mr. McGowan described the two methods: “First is to put a cable through to push out the lead, like one of those finger-pull toys where opposing sides connect, and the harder they pull, the more they stick together. Then you pull the old lead pipe out and reel in the new copper one.

“The second is what we call the ‘mole’ method, which is nicknamed the ‘bullet,’ which we use when we have a lot of rocks, bends, or additional pipes,” he said. In those situations, the lead line is merely disconnected from the water main and water meter, as much of it that can be removed is taken out, and the new lead line is attached to an electrically-powered mole-like head that burrows through terrain and concrete, with human crewmen driving the mole around, under, or over rocks, roots, gas mains, and water pipes.

The two techniques, he added, meant that the work teams could save time by merely digging holes at the key contact points, rather than the lengthy work of creating a trench from water main to house.

At 475 North 7th Street, Tiago Ferreira, who has been working in this field for three years, connected a “mole” to a backhoe, so that it could be lowered into a trench on 2nd Avenue. The crew had started work at 9 a.m., after the Dr. William J. Horton School had begun classes, to maintain safety for arriving parents and children.

The “mole,” looking like an extremely large and long bullet, as tall as a man, was connected by its tail to the copper pipe peeking through the concrete and dirt under 2nd Avenue. At the pointed front was a propeller that drove the device through the ground. A few switches were thrown, and the “mole” began to charge steadily into the muck, creating a small hole, dragging the new pipe behind it, going under a portion of the street that had not been dug up.

The efficiency was seen moments later, when the “mole” reappeared in the ditch by the water main, and Mr. Ferreira and his team guided it toward the main’s access point. They shut off the “mole,” removed it from the ditch with the backhoe, and connected the pipe with the main. It was 11:30 a.m. All that was left to provide homeowner Luis Calle with water, was to flush out the new copper pipe for 30 minutes and connect it to his water meter.

Mr. Calle stood watching while the Roman E&G team flushed out that pipe into a sewer to ensure it was clean, taking a keen interest in the progress. He works in the field himself. He has repaired sewer lines and water mains for 19 years.

“I signed up for this program months ago,” he said. Referring to the city requiring residents to move parked cars and closing the street for the job, he added, “That hasn’t been a problem, and they crew is not too noisy.”

Then, looking at the work from a professional standpoint, he said, “They’ve done a very good job. I want to thank the city for their help.”

With the flushing done, the copper pipe was connected to Mr. Calle’s meter. The Roman E&G backhoe began filling in the ditches in the street. As soon as they were filled and compacted, Roman E&G would cover them with asphalt to eliminate driving hazards, let it settle, and finish the repaving job in two weeks. The removed lead pipe would be sold for scrap, anywhere from 20 cents to $1 a pound.

Through a $120 million bond program created by the City and Essex County, Newark is replacing every single lead service line, and not just in the city but also Newark water distribution system areas in Belleville and Hillside. Newark will change their lead service lines as well, all in about 24-30 months.

A new ordinance allows the city to replace lead lines without the homeowner’s permission. In a city where more than 74 percent of the people are renters, Mayor Ras J. Baraka has said it was essential to get lines replaced without having to track down landlords. “Since we announced the free program, we’ve had 2,000 to 3,000 new applications,” Director Adeem said.

To do so, the City has launched a massive volunteer door-to-door effort to sign up Newark residents for the lead service line replacement program and the city continues to give out bottled water to residents in the impacted areas.

To date, the city has handed out or delivered 76,000 cases of bottled water.

The replacement project is being accomplished in the face of this summer’s heat and rain, Director Adeem said, and will go on during winter snow, which he anticipates will slow, but not prevent, continued work.

Newark has a vast array of water main pipes, ranging from 60-inch behemoths that carry primary feed into the city down to the six-inchers that support individual streets. When lead replacement teams or city crews go to work, Director Adeem said, they can find unusual artifacts, some more than two centuries old. “We found some milk and alcohol bottles marked ‘1728,’ at one place,” he said. “Another site had six or so beer bottles, left by a work crew from the 1800s. They were drinking on the job. You can’t do that now.”

While the Roman E&G team finished up at 475 North 7th Street – the third company is Newark-based Alfonso Mechanical – Harnio Mantilla sat in a chair on his doorstep at his family home at 478 North 7th Street diagonally across from the job site, watching the digging. His lead service line had been replaced two weeks before.

“They did a very good job,” he said of the replacement work. “The water is great now.”

“One of the things we did,” Director Adeem added, “was to put in new and wider pipes. People get better water pressure now and improved flow.”

Mr. Mantilla agreed. “We can take showers more often because of the increased water flow. It’s like an early Christmas present,” he said.