First of City-wide cleanups sweeps through the South Ward 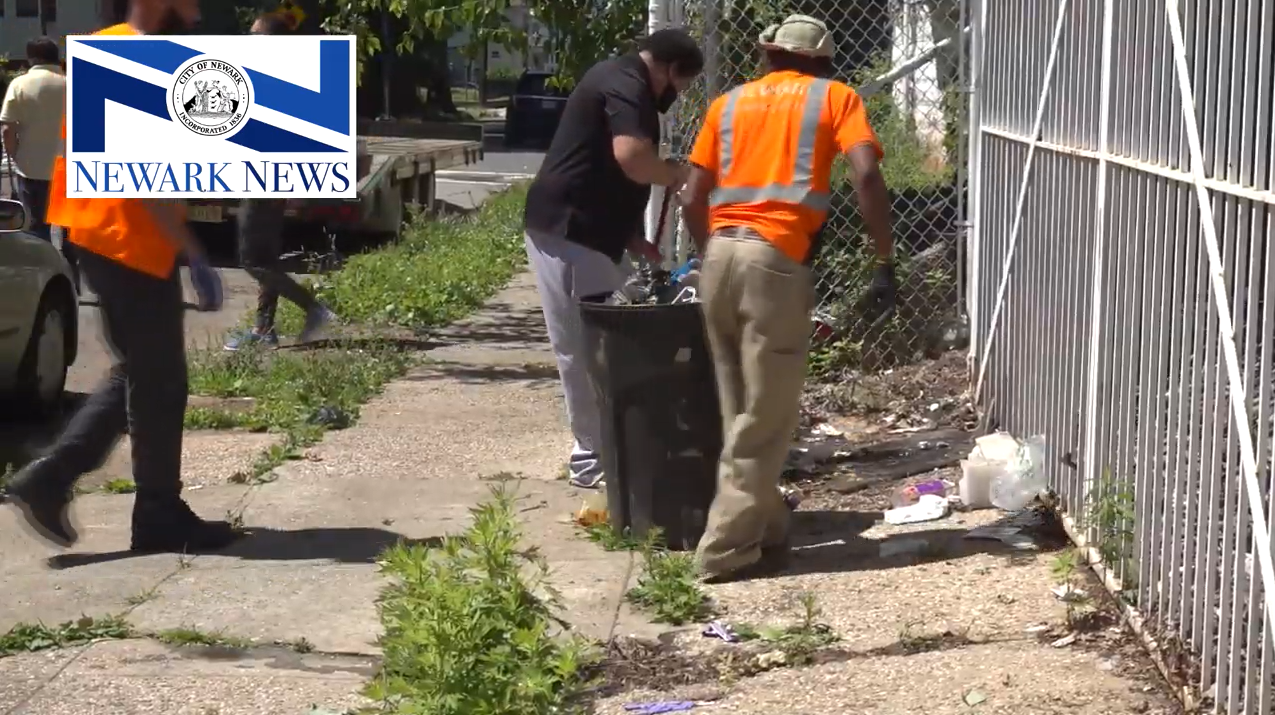 NEWARK (June 15, 2020) – Down the street from the Deliverance Temple on Stanley Avenue, the City Public Works crews rolled off one of the 10 industrial-sized trash containers in the South Ward for the Community Cleanup.

By 10 a.m., the bright blue, 10-yard container was filling up. Three-quarters of the bin was filled to the top, and the people kept coming with old furniture, broken appliances and other household junk they were waiting to unload during 14 weeks of shelter-in-place orders in the City.

“They (residents) did this in about an hour,” said City Public Works Director Khalif Thomas, as he watched the community activity.

The South Ward Community Cleanup was the first of the summer. Cleanups will be held each weekend in a different ward, then rotated through at least once more.

One reason is that bulk pick-up had been suspended for more than three months to keep residents and workers safe.

With restrictions easing, Mayor Ras J. Baraka wanted a first step of reopening to be a City-wide cleaning, a giant and ambitious version of clearing out the cobwebs.

Outside the Deliverance Temple, a woman swept up the litters from sidewalks and curbs, and once done, crossed the street to keep working. Men balanced junk-laden wheelbarrows or hand trucks as they pushed them down the street, to the open end of the bin. In a small sign of community cooperation, stacked their loads neatly, as far back as possible, to make use of every square-inch of the bin. It was needed, as people came from their basements and garages, down their driveways, carrying obsolete big screen TVs, outgrown children’s toys, vacuum cleaners whose motors quit, and the like.

In other areas, sanitation crews and volunteers worked together and moved through the streets, sweeping sidewalks and curbs, filling a sanitation truck as it moved slowly through the neighborhood. On the Hunterdon Street blocks south of Route 78, one of the volunteers was the Mayor himself, using a broom and long-handled dustpan, leading by example.

While work was being done on the streets, there were two centers where people could pick up recycling cans and other cleanup supplies. There was a steady flow of residents at the Bo Porter Sports Complex and Clinton Avenue Community Soundstage, where Faatina Reynolds, 8, summed up the day perfectly, “people don’t want to live in a messy City. They want to be proud of the City.”

For more information on sanitation news and special events, visit Director Thomas’s “Trash Talk Tuesdays” on the Public Works Facebook page each week at noon, visit the City webpage or call the Department of Public Works at 973-733-3644.