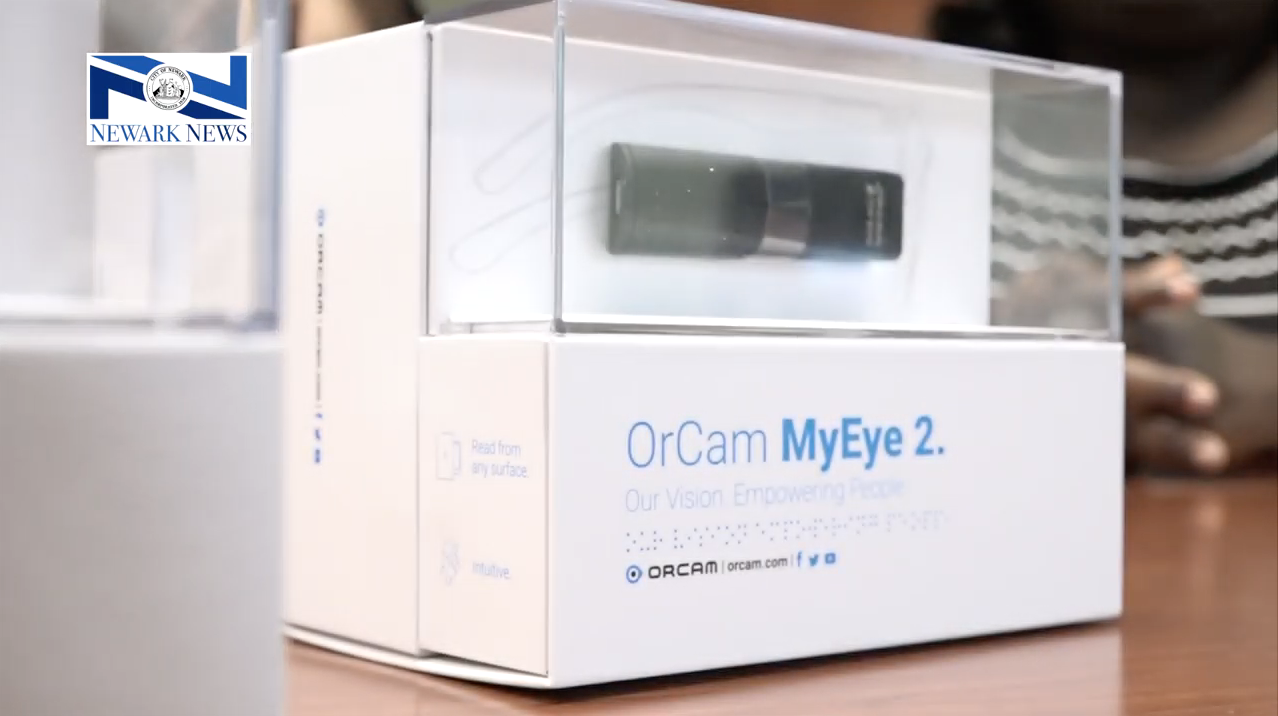 Krystle Allen and Naquela Wright-Prevoe bonded because of a rare disease that took the eyesight of both young women in their teens.

‍
They have been advocates for the sight-impaired ever since. Krystle  founded Eyes Like Mine with the help Naquela in 2014, and their non-profit group has a home in the City’s Center of Hope at the Vince Lombardi Recreation Center.

‍
A few days ago, the two women were in the office of Dr. Mark Wade, Newark’s director of the Dept. of Health and Community Wellness, to take part in demonstration of a device that can only be described a miracle for the sight-impaired.

‍
The cutting-edge technology of the OrCam My Eye will allow people with sight challenges to recognize faces, identify colors and read books, signs and packages. It can also differentiate the amounts of paper currency and read bar codes.

‍
The lightweight device is not much bigger than USB thumb drive but has a camera, microphone and enough stored information to read three languages, identify 100 faces, 50 products, and scan barcodes for 200 more. It clips on the eyes glasses and the practical uses allow a sight-impaired to have the experiences many of us take for granted.

‍
For instance, when a person with sight challenges is out in public, they can now recognize a friend or neighbor, and read informational signs. They can shop and cook with confidence that they are choosing the right packages and ingredients.

‍
During a demonstration by Eve Posner, the OrCam sales rep for New Jersey, she showed how the device stored the faces of Dr. Wade and Naquela in little more than 30 seconds. Then, when she turned the device to look at either, it announced their name.

‍
She held up a one-dollar bill and the device said, “One dollar” in a pleasant Siri-like voice. Then she did it with five dollars.

‍
Next, she took a box of Milk Duds candy, and scanned the barcode. Sure enough, the device said “Milk Duds.”

‍
The road to the City obtaining 10 of these amazing devices began with a People’s Assembly community meeting on public safety last year.

‍
“Several hearing-impaired people there told us they felt the City wasn’t as inclusive as it could be,” said Andrèa Mason, the senior director of the People’s Assembly.
Another meeting, exclusively for the hearing- and sight-impaired, was held almost immediately and moved Mayor Ras J. Baraka to take quick steps to make the City more welcoming and easier to navigate for people with hearing and sight challenges.

‍
Quick steps is not a cliché in this case. The Mayor merged Eyes Like Mine with the Newark People’s Assembly and ordered up signing at most City events. But he also took part in Eyes Like Mine’s Dancing with the Blind awareness-raising event, partnering with Naquela in a hip-hop routine.

‍
“He came to every practice,” Krystle Allen said. “He gave us his full support. Once we made him aware, he saw we needed to be recognized. I proud to live in City that recognizes us and gives us full support.”

‍
Along the way, Eve Posner learned of Eyes Like Mine’s work and connect with Krystle, and the OrCam My Eyes were introduced to Dr. Wade and the health department.

‍
Dr. Wade said devices will be available later in the month at several locations.

‍
“We will have four here in the health center, so people will be able to read their prescriptions and other health information,” he said after the demonstration.  “We hope to put two in shopping centers to help the sight-impaired normalize their shopping experience. Two will be in City Hall to help them with their taxes and other City business and one will be at the library.”

‍
That added up to nine – and then Dr. Wade had a pleasant surprise for the two Eyes Like Mine founders.
‍

“The 10th will go in your office (at the Center of Hope),” he told them. “That is something we want to do for you.”