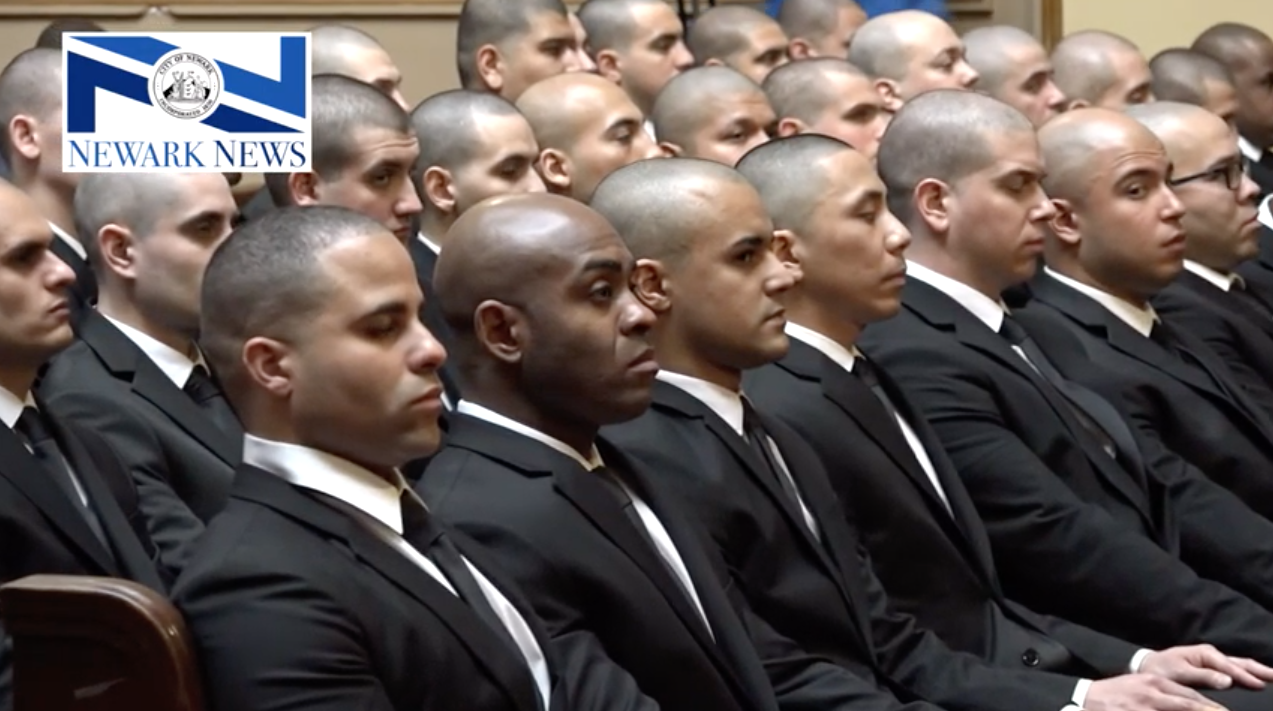 With that, Firefighter Rispoli, on loan from the Fire Division’s Special Events unit to take the men of the 48th Newark Fire Academy Recruit class through the ceremony that would welcome them to training, began rehearsing them on the ceremony’s procedures: salutes, rendering honors during the National Anthem, bowing their heads for the invocation and benediction, and leaving the chamber in single file.

There were six African-Americans, 15 Latinos, 17 Whites, and one Asian in the class, but you had to look close to tell that – they were all jammed tightly together, all had shaven haircuts, and all wore identical dark blue suits and ties. That was, of course, to emphasize teamwork. Five of them had switched from the Police Division to the Fire Division, trading police Body Cams for fire “bunker gear.”

There were a good number of family members and friends attending the event, held on Monday, February 24th, despite it being the start of a work week. One was Kianny Vaca, wife of Recruit Christian Vaca, along with their seven-year-old daughter.

“We’ve known each other for 15 years and been married for four,” Ms. Vaca said. “Christian wanted to be a firefighter all his life, and made the decision to apply for it this year. I helped him stay focused.”

“I watched him do his homework,” their daughter chipped in.

Now it was time for the ceremony. The Color Guard presented the flags, Mayoral Aide for Culture and Tourism Gwen Moten sang “The Star-Spangled Banner,” and Father Paul Donahue of St. Lucy’s Roman Catholic Church, the Public Safety Deputy Chaplain, gave an invocation that sought protection for the young men joining the Division.

Then came greetings and pep talks. First, Mayor Ras J. Baraka: “I’m honored that 39 men want to be Newark Firefighters. It’s not a job. It’s a career, which is vitally important for 300,000 residents who depend on you to protect them. Our Fire Division can compete with anyone in the nation. It’s the best there is. Your training will be extensive. It will be comprehensive. You will find training very hard, that’s so your work is so much easier.”

Mayor Baraka was followed by Public Safety Director Anthony F. Ambrose, who echoed the Mayor in many areas. “Our Fire Division is the best in the country. I have seen it myself, you running into burning buildings. Your family will support you at all times. But remember that you still have rules to live by, in both your private and public lives,” he said.

Last was Fire Chief Rufus Jackson, who said, “You are embarking on a journey that will transform your lives. This is a calling. We seek people with passion, empathy, and courage. You will face 14 grueling weeks of training that will test you to your limit, but what you put into it will be what you get out of it. Look for quality, and I will look forward to watching you persevere.”

With a benediction and commands from Firefighter Rispoli, the stone-faced recruits marched out of the Chamber in single file, headed for a Fire Department bus. They headed for their first day of training, which would be mostly initial orientation and paperwork. Family members took iPhone pictures of their young men as they strode by.

“They’ll do classroom work for a week,” said Deputy Public Safety Director Raul Maleve, himself a veteran Newark Firefighter. “They’ll have physical training every morning, of course. Then in their second week, they’ll draw their gear, and start doing training evolutions.” These include use of ladders, pumps, and hoses, driving the apparatus, and even learning how to cook food for the firehouse.

By the eighth and ninth week, the recruits will do “live-burn” training in Middlesex County, putting out actual fires with their equipment. They will also learn the life and service of a member of the Newark Fire Department who perished in the line of duty, dedicate their class to his name, and create a project in his honor.

Meanwhile, the family members were right there to lend support in the Council Chamber. Deborah Boccanfuso, of West Orange, who teaches fourth grade in Maplewood, talked about her son. “All he ever wanted to be since he was a kid was a Firefighter. He’s very driven. We give him all the credit. We’re proud of him,” she said.